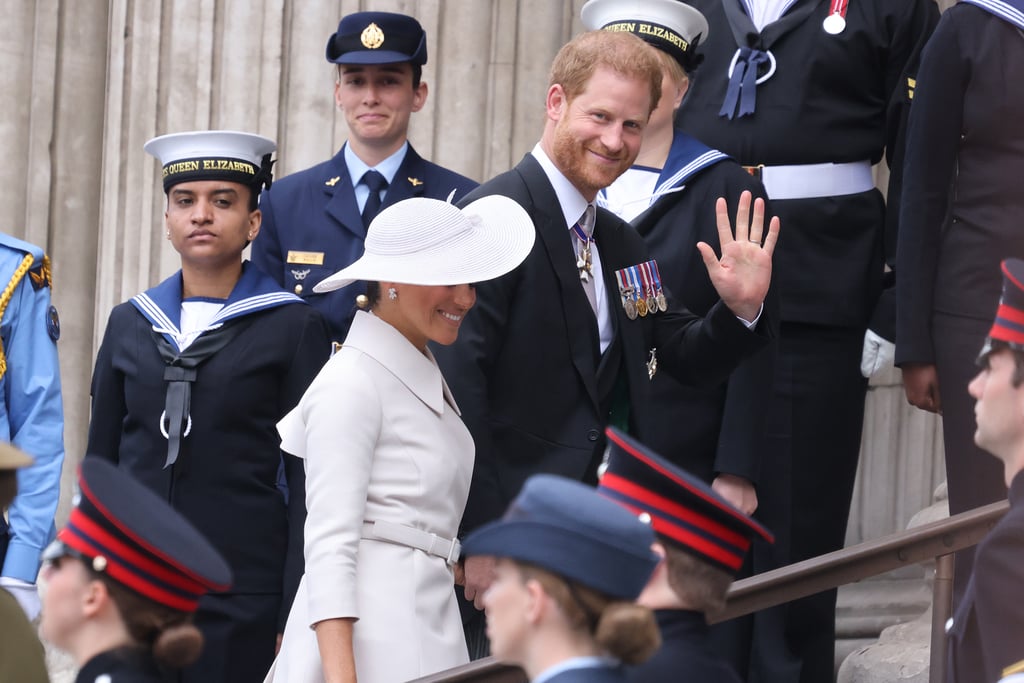 Prince Harry and Meghan Markle have officially returned to Britain with their two children, Archie and Lilibet Mountbatten-Windsor, to celebrate Queen Elizabeth II's Platinum Jubilee. On June 2, the couple attended Trooping the Colour, an official celebration of the queen's birthday, though they didn't appear on the balcony alongside other working royals. Harry and Markle watched the ceremony from the Major General's Office inside Buckingham Palace, a large ceremonial room with a view of the events outside. Unlike other royals, they didn't arrive in a carriage but instead privately arrived and departed from the event.

After the event, the queen finally met her great-granddaughter Lilibet in person for the first time, as confirmed by Entertainment Tonight. The Duke and Duchess of Sussex also brought their son, Archie, back to the UK, and he reunited with his great-grandmother on Thursday as well. This is Lilibet's first time in her father's home country.

At the national Service of Thanksgiving at St. Paul's Cathedral on June 3, Harry and Markle made their first public appearance with the royals since 2020. The couple arrived hand in hand, smiling, and were greeted by cheers from the crowd. Inside the church, they sat in the second row with Harry's cousins Princess Beatrice and Princess Eugenie and their husbands. As the couple left the service, they chatted with Harry's cousin Zara Tindall (Princess Anne's daughter) and her husband, Mike Tindall.

Back in February, the queen celebrated her actual Platinum Jubilee, an occasion that marks her 70 years as Britain's monarch, and the nation will celebrate the achievement with a special bank-holiday weekend. The four-day celebration kicked off on June 2 with Trooping the Colour. Queen Elizabeth II did not attend the thanksgiving service on Friday after she experienced "some discomfort" after Thursday's events. "The Queen greatly enjoyed today's Birthday Parade and Flypast but did experience some discomfort," Buckingham Palace said in a statement. "Taking into account the journey and activity required to participate in tomorrow's National Service of Thanksgiving at St Paul's Cathedral, Her Majesty with great reluctance has concluded that she will not attend."

Saturday, the royals will attend the Derby Stakes, and on Sunday, thousands of people will take to the streets to celebrate the queen. The festivities will end with the Platinum Jubilee Pageant, a musical celebration featuring Diana Ross, Sir Elton John, and Alicia Keys, among others. It's not clear if the queen will be in attendance at those upcoming events.

Harry, Markle, and their kids were pointedly not invited to stand on the Buckingham Palace balcony during Trooping the Colour this year. "After careful consideration, the Queen has decided that this year's traditional Trooping the Colour balcony appearance on Thursday 2nd of June will be limited to Her Majesty and those members of the Royal Family who are currently undertaking official public duties on behalf of the Queen," a Buckingham Palace spokesman said in a statement to People on May 6. That's why the pair watched the ceremony from inside Buckingham Palace. Harry and Markle last attended the event in 2019.

Related:
Prince Harry Gushes Over Fatherhood: "I Love Every Part of It"

Harry's uncle Prince Andrew was also not invited to stand on the balcony with the other working royals. The prince was removed from duties following sexual-abuse allegations and revelations about his relationship with Jeffrey Epstein. Similar to the Sussexes, the Duke of York was initially expected to attend other jubilee events, including a Thanksgiving service at St. Paul's Cathedral. However, he will no longer be in attendance as he's tested positive for COVID-19.

The Sussexes are expected to appear at the Derby Stakes on Saturday, which is also Lilibet's first birthday. Harry and Markle are also expected to attend the Platinum Jubilee Pageant on Sunday night.

Harry and Markle most recently paid the queen a visit in April while traveling to this year's Invictus Games in the Netherlands, stopping by Windsor Castle and reuniting with the queen for the first time since stepping down. The couple have been active since, with Harry speaking out about his concerns about social media on May 16. They also shared an affectionate moment at a polo game in Santa Barbara, CA, on May 22.

The Sussexes recently renewed their lease on Frogmore Cottage, where the couple lived before moving to Montecito, CA, and where they will be staying during the jubilee. This may signal that they intend to spend more time in close proximity to the royal family in the future.