Last night I sat in the Emmy press room as each honoree spoke with excitement and genuine surprise about his or her win (check out the full list here), but several of the winners threw me for a loop. Julianna Margulies seemed like a shoo-in for outstanding dramatic actress until The Closer's Kyra Sedgwick was called. But then Margulies's Good Wife costar Archie Panjabi canceled out both Mad Men ladies Christina Hendricks and Elisabeth Moss in the supporting actress category. Plus, no honors for Lost? With the show finishing in its final season, I assumed voters would throw it a bone. 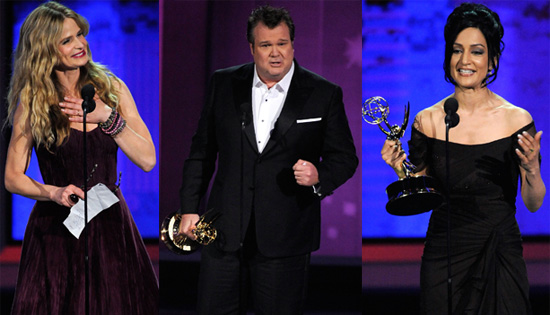 I'll be the first to admit that my Emmy predictions weren't exactly spot-on, but many of you seemed taken aback by the winners as well. So tell me, which shocked you most?

Don't forget to check out the rest of my Emmy coverage, including video highlights!