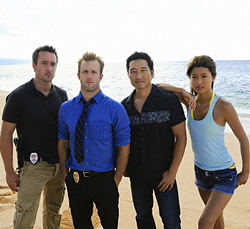 Apparently those new Fall shows weren't all bad: according to the Nielsen Company, Americans watched more TV in 2010 than ever before, with each person averaging 34 hours per week of tube time. Other notable year-end TV statistics include CBS's dominance as the No. 1 network among total viewers, while its series Hawaii Five-0 ranked as the most popular new show. Do you feel like you watched more television than usual this year?

Keanu Reeves
"I Remember This": The Nostalgic Matrix Resurrections Trailer Is Giving Us Major Déjà Vu
by Chanel Vargas 17 hours ago

Movies
Get Excited, Marvel Fans — Shang-Chi and the Legend of the Ten Rings Is Getting a Sequel!
by Njera Perkins 18 hours ago