And they're off! The award season race is officially underway with the announcement of tonight's Critics' Choice Award winners. The list isn't all that surprising, and many critics' favorites, including Colin Firth and Natalie Portman, walked away with a trophy as expected. Inception actually won the most awards overall by sweeping the technical categories, but it looks like the film to beat come Oscar time is The Social Network. Not only was director David Fincher recognized for his work on the movie, but it also picked up the biggest award of the evening for best picture. Do you agree with its win? Matt Damon also took the stage for the Joel Siegel Award, while Quentin Tarantino was honored with the first ever Music+Film Award. 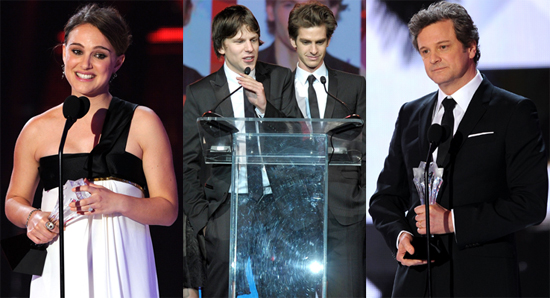 Overall, it was a fairly mundane evening, so here's hoping Sunday's Golden Globes are a little more exciting to watch. For now, take a look at the full rundown of Critics' Choice winners, and share your thoughts in the comments, when you read more.

BEST PICTURE MADE FOR TELEVISION
The Pacific

BEST FOREIGN LANGUAGE FILM
The Girl With the Dragon Tattoo