Take The Hangover, mix in one part Harold and Kumar Go to White Castle and one part Superbad, and you've got the trailer for 21 & Over. Miles Teller (Footloose) and Skylar Astin star as old high school buddies intent on getting their fellow best friend (Twilight's Justin Chon) drunk on the night of his 21st birthday. Though he's initially resistant because his intimidating father reminds him of an important exam the next day, he eventually gives in and winds up dancing in women's underwear on top of a car. You know, the usual hijinks. 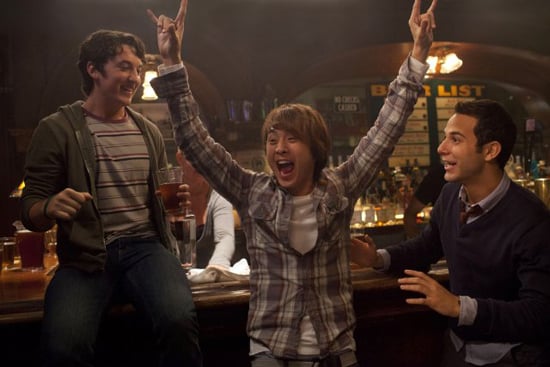 Does the world need another one-crazy-night movie? Maybe not. But did this trailer make me laugh out loud? Sure did. I'm not a fan of slow-motion vomit, but the "getting down on top of the car" part is hilarious. It should come as no surprise that 21 & Over comes from the writers of The Hangover, so we might be in able hands. Also, Astin was really cute in Pitch Perfect, and I'm excited to see him get some more screen time. The movie opens on March 1, and you can see the trailer after the jump.

by Naledi Ushe 52 minutes ago