Once you get past the bizarre title, there's actually a lot to like about the trailer for 3, 2, 1. . . Frankie Go Boom trailer. First, there's Sons of Anarchy's Charlie Hunnam looking adorable as ever as Frank. Frank's an average dude with an obnoxious older brother (Chris O'Dowd) whose just gotten sober and wants to make movies. Instead of getting serious about his craft, he secretly makes a sex tape of Frank and sells it to a Hollywood bigwig (Chris Noth). Unfortunately, the female star of the sex tape (Lizzy Caplan) is the daughter of said bigwig. Thus begins an adventure to intercept the DVD, which includes a pig and a transvestite (among other things). 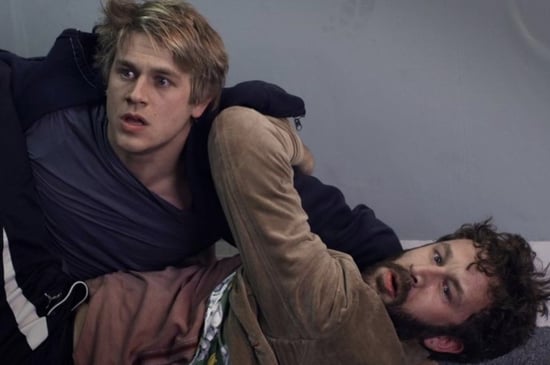 I love that Bridesmaids star O'Dowd is starting to pop up everywhere now, and his rapport with Hunnam is enough to make me want to see more of this movie. Plus, the supporting cast includes funny people Whitney Cummings and Adam Pally (Happy Endings), who we don't see on the big screen nearly enough. Watch the trailer when you read more.

Janelle Monáe
Shrouded in Mystery, Antebellum Bungles Its Setup and Miserably Fails Its Twist Ending
by Grayson Gilcrease 10 hours ago

Halloween
I Rewatched Halloweentown as an Adult, and the Storyline Is So Much Darker Than I Realized
by Chanel Vargas 1 hour ago