The new film 42, a biopic about baseball legend Jackie Robinson, has enough crowd-pleasing fun to entertain sports fans and history buffs alike — as long as you don't mind your sports movies with extra cheese. Starting in 1943, the movie follows Brooklyn Dodgers GM Branch Rickey (Harrison Ford) as he sets out to recruit the league's first African-American player for his team. His search leads him to Jackie (Chadwick Boseman), a hot-tempered talent from the African-American league. The gruff Branch mentors Jackie from Spring training to opening day with the Dodgers, supporting him as he survives the racism he encounters from the public and his own teammates. If 42 has piqued your interest, then here are four reasons I think you might like the movie — and two reasons you may not. 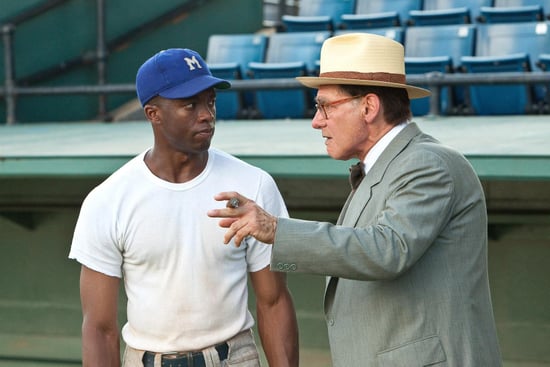 And if you want to find out the drawbacks of 42, then just read more.

Tom Hardy
The Venom: Let There Be Carnage Trailer Woke Up and Chose Chaos, and We're Thrilled
by Grayson Gilcrease 3 days ago