In 42, Chadwick Boseman stars as Jackie Robinson, the first African American to make to the big leagues. The inspiring story also features Harrison Ford as Branch Rickey, the executive who realizes that times are changing and recruits Robinson for the Dodgers. The trailer hints at the brutality Robinson faced on the baseball diamond (baseballs thrown at his face, general animosity from competitors and his own teammates), but the overarching theme is one of hope as Robinson opens the door for racial integration. 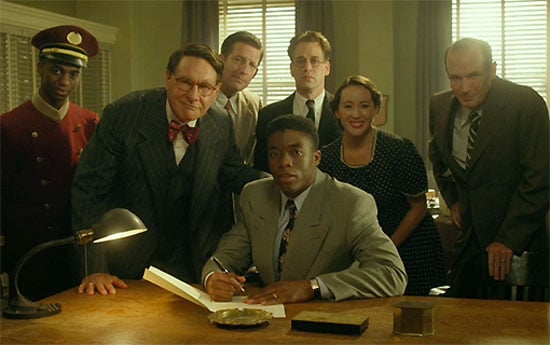 Is there any trailer that a good Jay-Z song can't make better? As soon as the bars for "Brooklyn Go Hard" started up, I was sold. Robinson's story represents a huge turning point in American history, one ripe with cinematic potential, so I'm looking forward to seeing this one when it opens April 13, and you can watch the trailer after the jump.

Steven Yeun
We Don't Know Much About Jordan Peele's New Horror Film, but the Poster Offers Some Clues
by Kelsie Gibson 19 hours ago

Netflix
Sexy Movies to Stream on Netflix in August, Because the Only Place You Should Be Is Indoors
by Corinne Sullivan 22 hours ago

Movie Trailers
Blink and You'll Miss the Diabetic Kid in Pixar's Turning Red Trailer, but It Left a Major Impact on Fans
by Kate Schweitzer 22 hours ago

by Corinne Sullivan 16 minutes ago