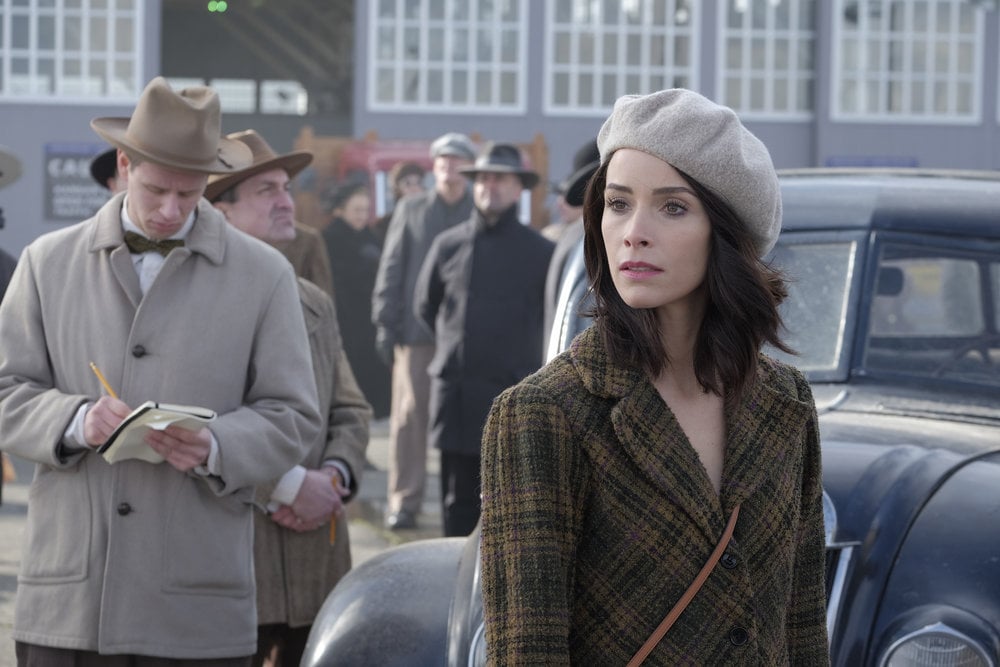 NBC's Timeless is already proving to be one of Fall's best new shows. Not only does it go back to basics with the time-traveling genre, but its plot has proven to be quite the thrill ride for history buffs. We had a chance to sit down with the show's star, Abigail Spencer, and she dished on which eras the show will travel to next, what it was like working with Once Upon a Time's Sean Maguire, and the crazy connection her character has to a well-known '80s movie. Warning: there are a few spoilers ahead.

POPSUGAR: What do you think sets Timeless apart from the different time-traveling shows on TV right now?
Abigail Spencer: What's very interesting is how time travel is coming to the forefront in our consciousness. As we're getting more connected as a society, as we have more ability to really be in touch with anybody in the world, it's very interesting that, at this moment, we need to go back and explore history. We're a little nervous about where our future is going and the only way to change our future is to examine our past. I haven't seen any of the other shows, so I cannot speak to how Timeless is different, but I believe that ours is like classic time travel. It's like if Steven Spielberg was making a time-traveling movie in the early '80s, I think he would have made Timeless. 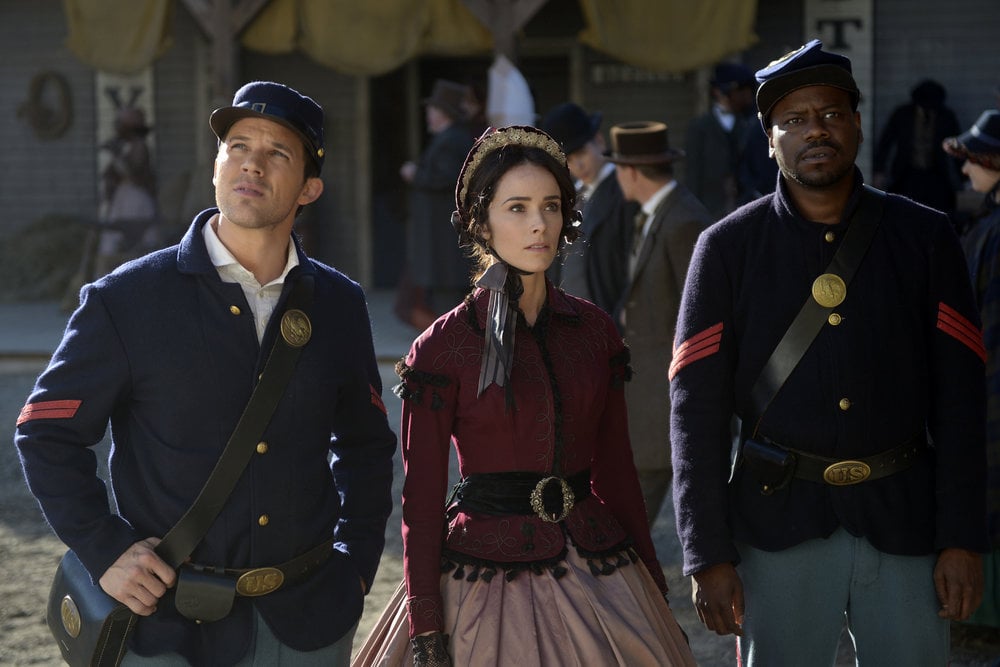 PS: I think it's interesting how race plays into the first two episodes with Rufus's character. Will any other social issues be addressed in future episodes?
AS: Absolutely. What I love about the show is that it's a show you can sit down and watch with your whole family. That's why it's been paired with The Voice. This is a show where you can all learn something and not realize you're learning something. It's a total put your feet up, eat some popcorn, super entertaining, but it also has some real weight to it through the history lesson that you get every week. But we're doing it in a way where it's going to keep developing and growing over time. Every road the characters go down, they're going to leave their mark. They might be able to change one thing for the better, but there lies the deeper issue. We go back in time and we have the power to change things, but should we?

PS: What other time eras will the show explore this season?
AS: After this second episode, we'll go to 1962 Vegas for a DNC fundraiser for John F. Kennedy. Then, we go to 1944 Germany where Lucy meets Ian Fleming, who wrote all the Bond novels and was actually was an undercover spy. Something about me and the '40s is a very good match. I actually looked like I could have lived in that era. After that, we go to the Alamo, so 1800s Texas when it was still governed by Mexico. Then, we are in 1754. Oh, and we go to Watergate too. That's a really interesting episode. We're going to all of these well-known moments in history, but we're going to learn something that you never knew about that time period. We actually have a historian in the writers' room and it's really amazing how they're weaving in these fun storylines. 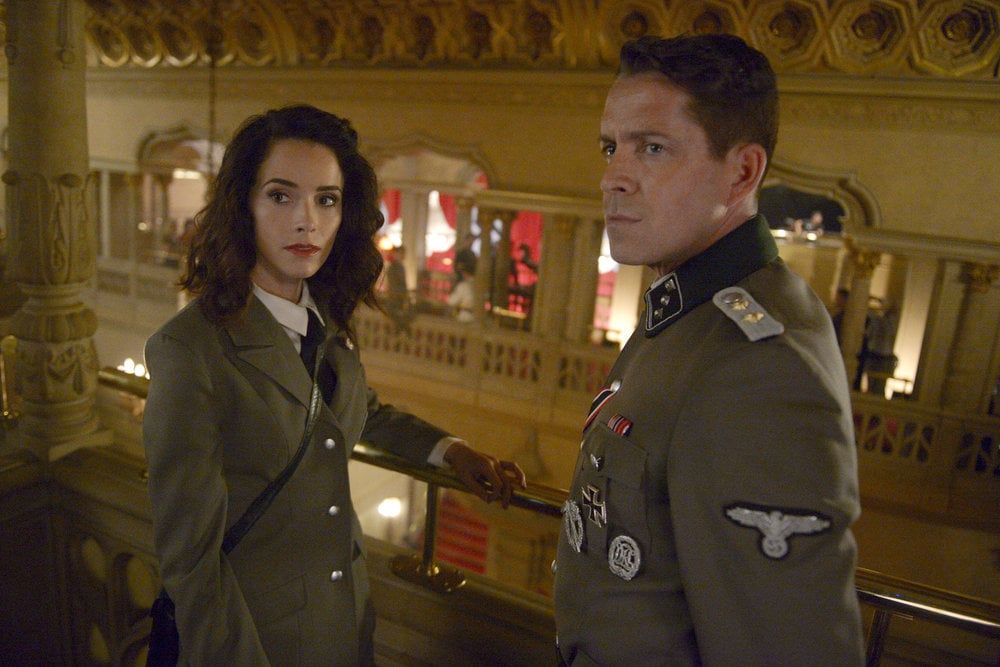 PS: You mentioned Ian Fleming, and I have to ask, what was it like working with Sean Maguire?
AS: A dream. He's so fun. I don't know if you know this about Sean Maguire, but he was a British pop star in his teens, so he's a total song-and-dance guy. So, we were just singing the whole time. It's so funny because we were in these super-period, superbeautiful costumes, and he and I were just so silly. He was a joy. He said being on the show was like Candy Land. He was like, "This is my favorite job I've ever done."

PS: Can you tell us anything more about his character and how he interacts with Lucy, Wyatt, and Rufus?
AS: Well, I love to save some of the mystery, but always is the case with Lucy, Wyatt, and Rufus is that they are going back in time not totally sure what their mission is going to be. They figure out where Flynn in time has gone to and then a 50-mile radius of where he is. One of the big surprises is that they're looking for the Allied resistance in Germany. They go to this bar and find Ian Fleming, but he's undercover as a German solider. It's really great, because then you learn that Wyatt's character is a huge Bond fan, and it makes for a really cute story. 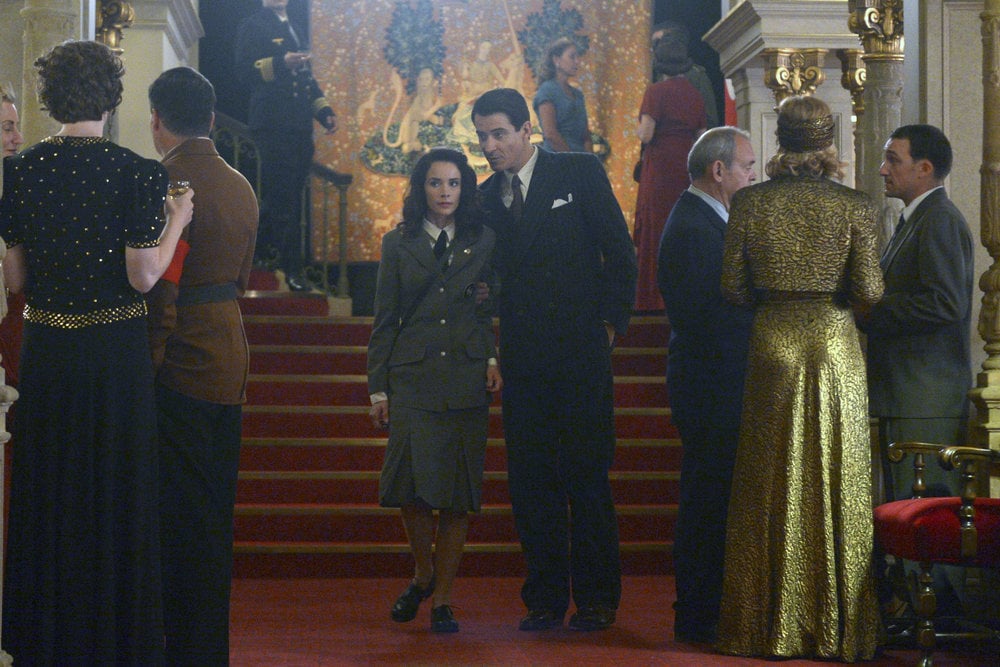 PS: How does Flynn and Lucy's relationship develop over the course of the show?
AS: That's a huge storyline for the show. That's the huge section that we're going to keep exploring because Flynn seems to know Lucy. He keeps telling her all of these things that are going to happen to her, and she doesn't believe them because they are not part of her reality. There's a deeper layer, and that first step is really paying attention to that journal and Rittenhouse, because that's going to keep coming up. Also, why Lucy? Why did they pick Lucy? Is Lucy really just a historian, or is she someone who is not living in her calling and she's part of a much bigger event that's coming down the road? These are just a lot of seeds that we're planting for the future.

PS: You mentioned Flynn's journal with Lucy's handwriting, and it kind of seems like he's using it as his playbook for how to do everything. Should we be more concerned that Lucy is the villain?
AS: What I hope is that anything is possible. What we're saying is that Flynn is the antagonist right now. He's the one that's making all of the stories come together, but like any good story, there will be a really good twist, and hopefully any "bad guy" will have a side to his story as well. We're actually getting ready to shoot an episode that's really going to lean into who Flynn really is and his why for doing everything.

PS: If you could time travel to one specific era in history, what would it be?
AS: I'm just so into the '40s right now. I just want to be Katharine Hepburn's maid. That's really what I want is to follow her around. I just love movies, and I'd love to see how they made those musicals. It would just be so great to go back and be in one of those big movie musicals. I would die. 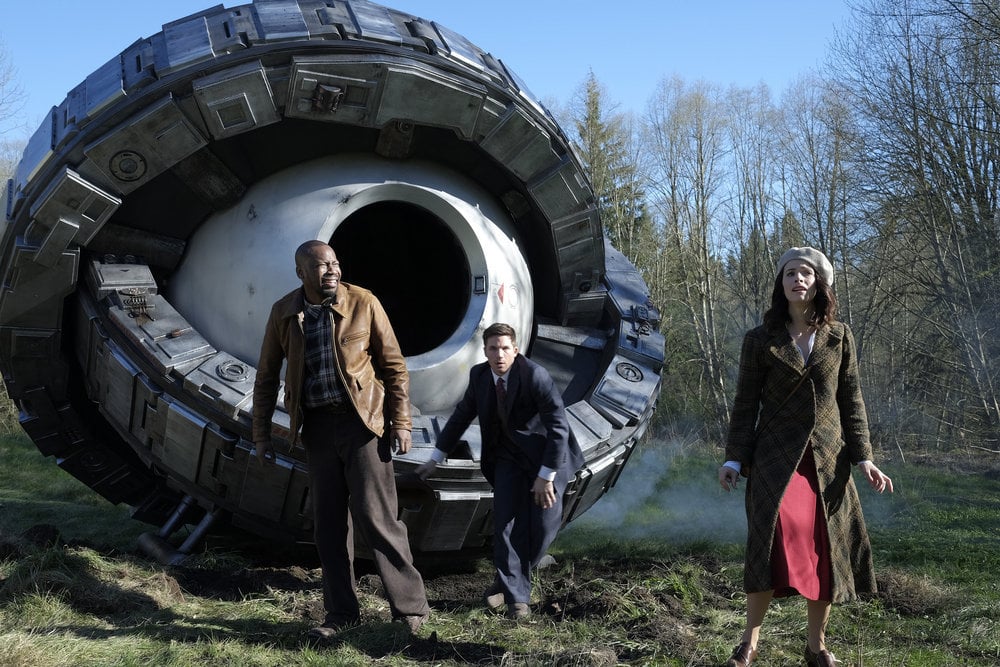 PS: I couldn't help but notice that the three main characters have similar names to the characters in the '80s movie Bill & Ted's Excellent Adventure. Is that purposeful?
AS: Yes! Good for you. You're one of the only people that have caught that. With Eric and Shawn, everything is purposeful. There are Easter eggs all over the place. They are so good about weaving in other shows or other characters or other stories, and they're doing that on purpose. We want to be part of the time-traveling family. We want to be in line with what was created before. So yes, there are some great nods.

PS: Can you give any tips about what to look for?
AS: Always look for the names of the bars. We always go to different places, so see if you can track down whatever the name is. Remember Taco Tuesdays from the beginning of the pilot, that's an Easter egg. Anytime a name is dropped or we go to an establishment, look and see what the name is. Or anytime you see a name tag, remember to keep track of that.