Jimmy Fallon recruited his guest Alec Baldwin for a routine police sketch this week involving whipped cream, Planters peanuts, and poorly attached fake mustaches. The two starred as officers from the (fake) '80s cop show Point Pleasant Police Department. They have a penchant for chewing food while talking, then spitting it onto each other. It starts off rather tame but soon escalates as they move on to wet food. I love this not because I love watching projectile food, but because it really harkens back to Fallon's days at Saturday Night Live. Baldwin holds the record for hosting the show a whopping 16 times, meaning this is as SNL as it gets on a Monday night. 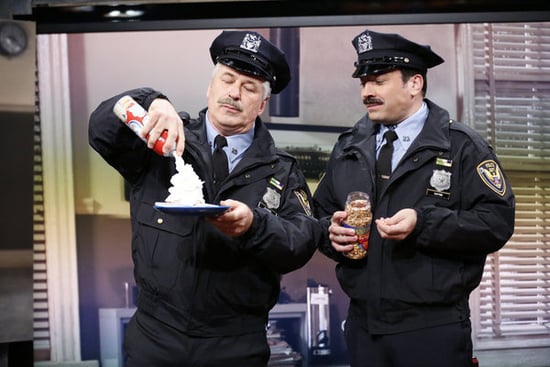 Watch the sketch after the jump.