A lot has happened in the aftermath of last week's holiday-themed episode, with the most significant change being Sister Jude's major demotion. She wakes up shackled and restrained in a cell as a Briarcliff patient, in one of those "this is my worst nightmare realized" kind of scenes. Too bad for her, it's reality. You could call it karma, but I call it a setup. While things may be looking grim for Sister Jude, Lana and Kit get their first real chance at escaping Briarcliff, Bloody Face, and the electric chair. 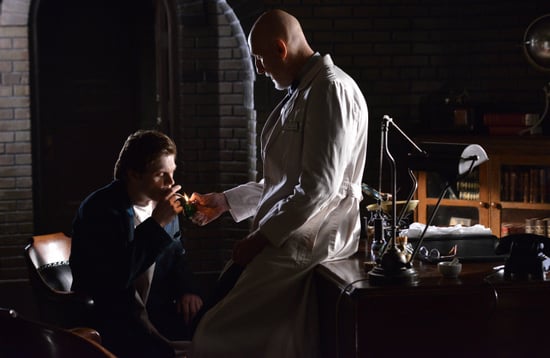 But a silver lining is never what it seems on American Horror Story, and the gruesomeness doesn't let up this week, either. At least we get an explanation for the aliens (finally!), and it could be connected to that other seemingly rogue story line: Dr. Arden's Nazi experiments. Let's break down the most insane moments after the jump.

What did you think of this week's episode? Do you think Lana and Kit's recording of Thredson's confession will ever see the light of day? And what could the connection between Dr. Arden and the aliens possibly be?

Bulgari
Mj Rodriguez Sketched Her Own Emmys Dress, but Turns Out, It Was Already in Existence
by Sarah Wasilak 23 hours ago