School is almost out for American Horror Story: Asylum. With next week's season finale looming, the writers had some work to do, which makes me all the more impressed to report that "Continuum" is one of my favorite episodes since the season began. The story jumps around a bit, following — spoiler alert — the death of Bloody Face and the reemergence of the presumed-dead Alma and her baby. Briarcliff is in the rear view for Kit and Grace, and now that we're out of the mental ward, we're reminded that it's the swingin' '60s! Though in this case, it's less Austin Powers and more Sister Wives. 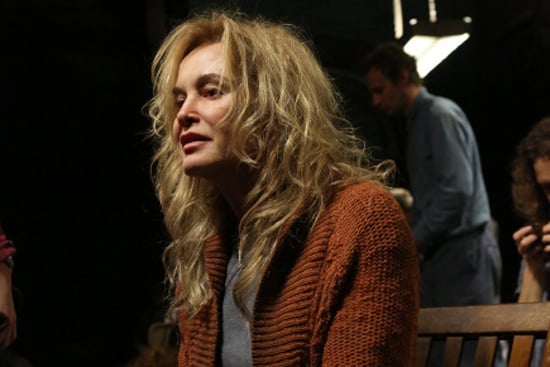 That's right. Seems Kit, Alma, and Grace find an "amicable" way to settle their situation, at least for a while. More on that in a bit. Flash forward and we encounter Lana at a book signing for her bestselling memoir. Lana's fulfilled her promise to expose Bloody Face, but she isn't quite the beacon of truth and morality that she promised Sister Jude she would be. Lace up your straightjackets and let's go through this week's most insane moments when you read more.

How was "Continuum" for you? What do you hope to see in next week's finale? Will there be any tie-ins from the first season?