It's beginning to look a lot like Christmas at Briarcliff in the latest episode of American Horror Story. Instead of tinsel and ornaments, however, the asylum tree is strewn with dentures and hair bows with the hair still attached. And Santa? After the last two episodes introduced the little serial killer girl and the angel of death, "Unholy Night" gives us our newest creepy character, a family-murdering Saint Nick (played by a darkly magnetic Ian McShane) who ends up locked in a room with Sister Jude and a closet full of whips. 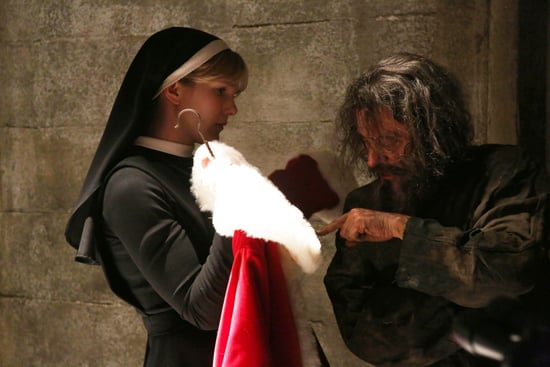 Whatever has been simmering inside Sister Mary Eunice finally boils over, and she gets even more blood on her hands. Dr. Arden seems to struggle with her lost innocence, and for the first time ever, we see him and Sister Jude working as an odd-couple team. But it wouldn't be an episode of American Horror Story without some jaw-dropping surprises. Let's break down the most insane moments after the jump.

Yes, there's a lot going on, as usual. I didn't even get into the last-minute appearance by our alien friends, who take away Grace's body for reasons I'm hoping we find out soon (along with their existence on the show, period). And why was Lana vomiting? Could she be pregnant with — gasp! — Bloody Face's baby? That would help explain the mysterious modern-day Bloody Face. For now, tell me what you thought of "Unholy Night." Did you have a jolly good time?

Saturday Night Live
Rami Malek and Pete Davidson Recap Squid Game in a Country Song, and We Can't Stop Singing It
by Yerin Kim 3 hours ago