American Horror Story kicks the creep-factor into high gear this week, delivering easily the most revealing — and terrifying — episode of the season. I tend to think I'm pretty desensitized to the bloody tricks and treats offered on the show, but I may have to sleep with the light on after watching "I Am Anne Frank: Part 2." We pick up where "Part 1" leaves off, with Dr. Arden hobbling away in the aftermath of Anne Frank's attack. It doesn't exactly turn out as she planned, but she's offered a chance to get out of Briarcliff later when her hubby comes along. She's not the only one who gets to take leave from the asylum; Shelley's will to survive gets her far off grounds, and Lana discovers there's a much, much worse place to be than in the common room. And remember Bloody Face? We meet him. 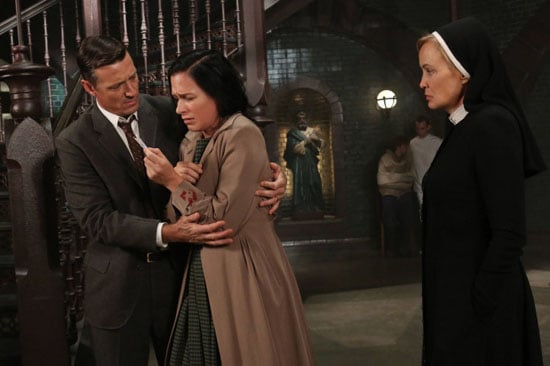 Warning: this post contains some major spoilers, so if you haven't watched the episode yet, then you may want to take a raincheck on reading. If you have seen it and are eager to talk Asylum, I'm detailing the most insane moments after the jump.

Are you as haunted by this episode as I am? Is Sister Jude done with Briarcliff for good, and is anyone else surprised that she's slowly becoming antihero this season?