I've been looking forward to the premiere of American Horror Story's second season ever since, well, ever since the first season ended. Asylum definitely has the same twisted vibe as last year's haunted house story, but now we've got even more characters to crowd our nightmares and an insane theme to boot. Jessica Lange is back as an intimidatingly devoted nun working at Briarcliff, a home for the criminally insane, but Sister Jude isn't nearly as evil as I'd imagined she would be. Her terrifying factor has already been diminished by the introduction of Dr. Arthur Arden (James Cromwell), Briarcliff's resident medical consultant/torturer. But I'm getting ahead of myself. 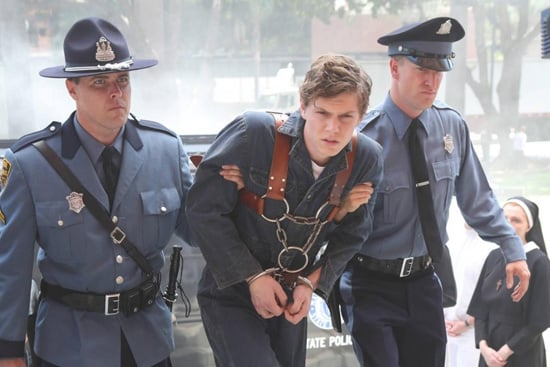 We first meet The Lovers, Leo (Adam Levine) and Teresa (Jenna Dewan), and they get to meet Bloody Face, who may or may not be an incarnation of Kit Walker (Evan Peters), this poor kid whose wife was killed by aliens. Got all that? There's a lot going on here. I hope you still have your nightlight, cause I'm about to break it down when you read more.

Are you looking forward to checking back into Briarcliff next week? Is the premiere everything you hoped it would be? Are you just as thrown as I am about the whole alien aspect? If Kit isn't Bloody Face, who is? And what really happened to Kit?

TV
Who Is the Sun on The Masked Singer? We Have Some Bright Ideas
by Kelsie Gibson 6 hours ago

Netflix
The Haunting of Bly Manor Isn't Inspired by a Real Place, but We Do Know Where They Filmed
by Amanda Prahl 2 days ago