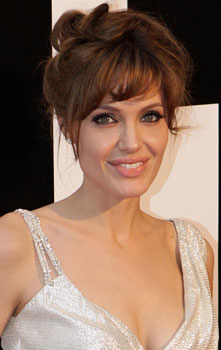 Angelina's next film already sounds like a labor of love: the actress has a love story in the works that takes place during the 1992-1995 Bosnian War. During a trip to Sarajevo over the weekend, she mentioned that the film will focus on a couple that meets before the war and shows how their relationship is tested in the period that follows. The movie is undoubtedly inspired by the philanthropic efforts of the actress in third world countries, though, Jolie said, "The film is a love story, not a political statement."

Production on the film is set to begin in the Fall, but don't expect to see Jolie's gorgeous face on the screen: the cast will be made up of actors from the former Yugoslavia.

Even without Jolie's name attached, I'm very interested in hear more about this project. The war in Bosnia hasn't gotten a huge amount of Hollywood attention, and it should be interesting to see how Jolie balances the subjects of romance and war without creating another overly cheesy clichéd film (no offense, Pearl Harbor).

Lizzo
The Rumored Eternals Soundtrack Is Full of Certified Bops by BTS, Lizzo, and More
by Maeve Reilly 19 hours ago

Hocus Pocus
Hocus Pocus 2 Is Currently Filming, but Not at the Iconic Location You Know and Love
by Kelsie Gibson 22 hours ago