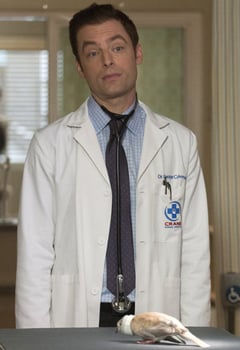 Say goodbye to Crystal the Monkey: NBC has pulled Animal Practice from its Wednesday night time slot in order to put Whitney in its place, effectively canceling the freshman series starring Justin Kirk. The new show had been struggling in ratings, and it comes on the heels of NBC's recent announcement that Whitney and Community wouldn't be debuting their new premieres this Friday, as originally scheduled. In fact, it looks like neither show will be on Fridays this season at all, if NBC keeps up this reshuffling (maybe Community will end up back on Thursdays after all!). As for Animal Practice, RIP George Coleman and furry friends.