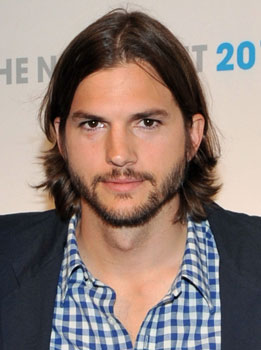 It's CBS's turn at the TCA stage, and before we got to hear about any new series, network president Nina Tassler addressed the returning series that people are perhaps the most curious about: Two and a Half Men. Tassler gave reporters the first real details about the character Ashton Kutcher will play to replace Charlie Sheen. Kutcher's character is named Walden Schmidt, and he's an "Internet billionaire with a broken heart," whom Tassler called a unique character. He'll have a two-part introduction over two episodes.

As for Sheen's exiting character, Tassler wouldn't confirm or deny whether he would start the season dead or alive, as has been rumored, nor would she comment on the actor's now-notorious behavior. She did, however, seem to highlight a difference between Sheen and Kutcher, saying that Kutcher is an "incredible professional," praising him as a "talented, funny, gifted actor." Tassler also noted that CBS had learned that there's "great value in hiring an actor like Ashton Kutcher," who is "committed to doing their job."

Netflix
Wondering Why You Recognize That Scary Music in Ratched? It's Pulled From a Classic Thriller
by Hedy Phillips 2 hours ago

Netflix
Not Sure If You Can Handle the Gore in Netflix's Ratched? Here's a Guide
by Grayson Gilcrease 20 hours ago