Anyone else still feeling the awkward tension from this week's episode of The Bachelorette? Between the confrontations and the two-on-one date, even I want to crawl into a cave and cry, except I'm afraid I'll find castoff Nate crying and pronouncing "quinoa" incorrectly. I thought Bermuda was supposed to be a happy place! Did The Beach Boys lie to me? Let's discuss. 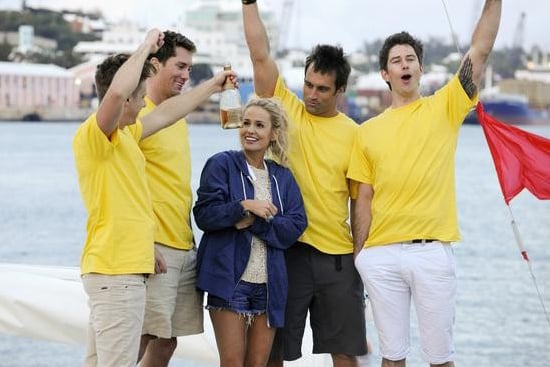 Let's recount the good times and especially the bad times from this week's episode when you read more.

The most enlightening part of this week's episode is that, refreshingly, Emily has a good head on her shoulders. In fact, her jadedness is an asset on The Bachelorette and she proves to be pretty perceptive during her prerose ceremony chat with Chris, though I am wondering why she chooses to keep Ryan around after admitting she was wary of him. What do you think? Were you disenchanted with Jef once the wind mussed up his cool hipster hair? Why can't Emily stop making out with Arie? Did I miss any whoa!-ments?

Netflix
You: No, Madre Linda Isn't a Real Place in California, but It Does Have a Clever Meaning
by Njera Perkins 14 hours ago

Music
Adele Is Giving Us a TV Concert Special and an Oprah Interview in 1 Night — We Can't Wait!
by Naledi Ushe 18 hours ago