In Jennifer Lopez's new film, The Back-up Plan, she returns to romantic comedy mode as NYC single Zoe, who's ready to have a baby on her own. As luck would have it, the day she gets inseminated, she coincidentally meets a handsome stranger named Stan (Alex O'Loughlin), who — wouldn't ya know it — just may be the one for her. 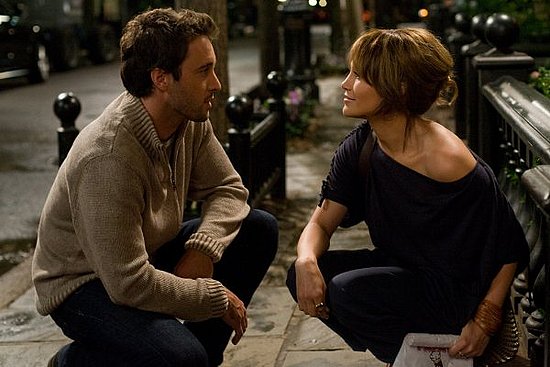 Even though it's a comfort to see Lopez in the strappy sandals of a leading lady, pregnancy-centric The Back-up Plan takes her to new territory: namely, burping, stuffing her face with food, and peeing onscreen. These attempts to distance Lopez from her real-life glamorous image are the film's first reach for humor, but they flop like most of the film's other jokes. Some genuine romance could have made up for these blunders, but instead, the movie focuses on how hard relationships and pregnancy are — not how wonderful they are.

The biggest laughs come from the ingloriousness of being pregnant and giving birth, but their overworked bits — like home birth and a toddler breastfeeding — are all gags we've seen and heard before. The Back-up Plan wants to align itself with Knocked Up, but it's cast in a sad, dark shadow.

When it's not being used as a punchline, pregnancy is viewed as the obstacle keeping these two characters apart. Right off the bat, Zoe and Stan's courtship is less than picture perfect, and I don't just mean wacky first date antics — they fight the moment Zoe reveals that she's expecting her miracle baby. Stan doesn't understand, and what's more, he's angry at her. Though her bump is treated as a typical bump in the road, Zoe and Stan continue to argue as they try to make things work. (And this is supposed to be her dream man?)

They deal with the kind of fights a new couple shouldn't have. They're the tired, combative fights that I don't want to see in a romantic comedy. Romantic comedies are a form of escapism — and I didn't escape here.