I don't remember aliens making an appearance in my own childhood sessions with Battleship, but I suppose when you try to make a toy into a feature-length film, you're afforded a few liberties. Unfortunately, the producers of Battleship may have spent too much time finding creative ways to explode things and not enough time on a plot, ending up with underutilized actors, in a wishy-washy destruction story. 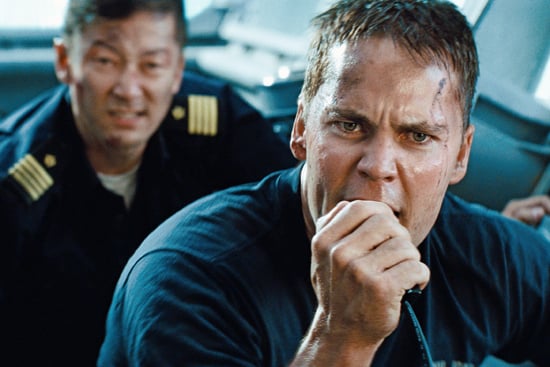 Battleship starts out in 2005, when the US establishes the Beacon Project, an effort to reach out to potential life forms on a planet that has a similar climate as the Earth. The government sets up a powerful signal on Hawaii capable of sending transmissions to the foreign territory. Little do they know the frequencies are being received, and not by friendly folks. Enter brothers Alex (Taylor Kitsch) and Stone (Alexander Skarsgard). Stone is clean-cut and responsible while Alex is generally a mess. We first meet them in a bar scene that turns to Alex breaking into a convenience store to steal a chicken burrito for his future girlfriend, Sam (Brooklyn Decker). Thanks to Kitsch's surprising physical comedy skills, the scene is the highlight of the movie. It all goes to the aliens after that.

Read the rest of my thoughts on Battleship after the break.

Flash forward to present day and the brothers are working side by side in the navy. Alex still has an edge, but now his biggest problem is asking Sam's father, who also happens to be the Admiral (Liam Neeson), for his daughter's hand in marriage. That is, until alien ships land off the coast, creating an impenetrable electromagnetic force field around the islands and blocking out most of the navy, with the exception of Stone and Alex's ships.

Skarsgard and Kitsch are both billed as Battleship's heroes, but the story mostly centers on Kitsch. It's a shame his potential is wasted on sequences that only allow him to bark orders in naval jargon, especially since he's so amusing at the beginning of the film. That said, the burrito bit isn't the funniest part of the movie. That award would have to go to either the alien ships (which, though intimidating, are clunky and move over the water like wounded frogs trying to make it to a stable lily pad), or to the unintentionally hilarious dialogue. Gems like "Who do I call to teach you humility? I'm sorry, I don't have that number," had the audience giggling when they weren't supposed to.

In a sea of male navy officers, we also have Rihanna making her feature film debut. As a petty officer, she doesn't have a major part in the film, and by no means is it an award-winning part, but she held up pretty well. I wish I could say the same thing for the aliens, whose faces and hands we eventually do see, though their true forms are obscured by heavy armored uniforms for most of the film. Halfway through the movie, I wasn't sure if there were aliens at all, or if the foreign ship itself was the alien.

I should admit that going into Battleship, my opinion had already been slightly tarnished because I heard no one in the film would say the one line I was anticipating: "You sunk my battleship." Unacceptable! The good news is that there are plenty of lines that are just as cheesy in the movie. The bad news is that most of the story, including the film's climax (which presumably is supposed to be awe-inspiring) is laughable. I will say this: Battleship has a lot of explosions, so if that's what you're going for in a Summer flick, then all hands on deck.