Are you prepared for the perfect combination of elegance, garish sparkles, and feathered hair? Then you're ready to experience the trailer for Behind the Candelabra, Steven Soderbergh's HBO film starring Michael Douglas as famously flamboyant pianist Liberace and Matt Damon as his longtime younger lover, Scott Thorson. Their relationship gets complicated when Liberace wants his muse to think of him as a "father, a brother, a lover, best friend," and recruits a similarly coiffed plastic surgeon (Rob Lowe) to make Scott's face resemble his own more closely. 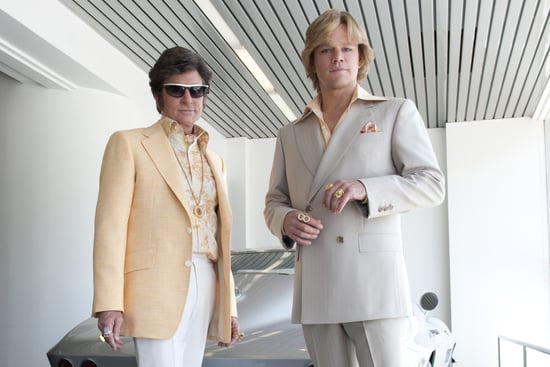 I love that this trailer has all the glitz and glam of Las Vegas but also takes a heartbreaking turn once Scott snaps, craving his own identity. The movie premieres on HBO on May 26, but don't miss the trailer after the jump.

Netflix
Mank: See How the Actors Compare to the Real Hollywood Insiders
by Stacey Nguyen 2 hours ago

Nostalgia
Overboard Is One of My Favorite Movies, but Dean Should Have Gone to Jail For a Very Long Time
by Caitlin Gallagher 4 hours ago

TV
Important Question: When Will HBO Max Become Available on Roku?
by Amanda Prahl 6 hours ago

Netflix
How Much of Netflix's Mank Is a True Story? Here's the Deal
by Stacey Nguyen 6 hours ago

HBO
Warner Bros. Is Releasing All Its Movies on HBO Max in 2021 — Here's the Complete List
by Amanda Prahl 6 hours ago

Movie Trailers
A Wendy Williams Movie Is Coming in 2021, and It Looks Absolutely Wild
by Grayson Gilcrease 8 hours ago