Kristen Stewart, Taylor Swift, Katy Perry — they're all women who've continued to dominate the headlines this year. Yet, very few Hollywood performers can boast the same level of fame in 2010 as Betty White. Even though she's approaching 89, White kept a busy schedule of TV cameos and talk show appearances that put her at the forefront of the entertainment scene. Some might even call it overkill. 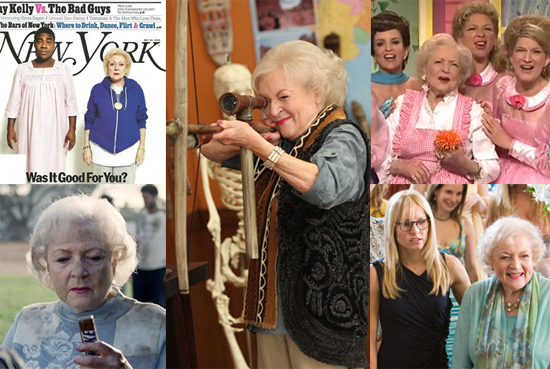 Looking back at the year, White's name was truly inescapable. It kicked off with her funny performance in Summer 2009's The Proposal. Thanks to the role, she quickly became the new hot thing in 2010.

In January, White celebrated her career with a Lifetime Achievement Award from the Screen Actors Guild; by February, she was starring in a popular Snickers Super Bowl commercial. The following month, she took a regular TV gig by joining the sitcom Hot in Cleveland. And then, there was the madness of Betty White's appearance on Saturday Night Live.

After a Facebook campaign lobbied for her to host the show, she accepted the offer from NBC — even though she confessed she was nervous about the cue cards. You were excited about her appearance, but we had some doubts: would her show be a letdown? White pulled it off with flying colors, thanks to a little help from SNL's female alumni. After the hosting job, she was the focus of yet another Facebook campaign, along with a very funny magazine cover.

Over the Summer, White signed a two-book deal, and popped up at a variety of awards shows. First, she took the stage at the MTV Movie Awards in June to help present to honoree Sandra Bullock, and witnessed the infamous Sandra and Scarlett Johansson smooch. Then in August, she stepped in for a fun cameo in Jimmy Fallon's opening at the Emmys, where she flirted with Jon Hamm (atta girl, Betty!). White also agreed to guest star on Community's Fall premiere. She appeared as the college's Anthropology professor in a silly turn that had everyone (including Joel McHale and Alison Brie) singing her praises. And not to neglect the big screen, she appeared in the comedy You Again where she tossed around her flirty sass. Her face was everywhere to the point where even she teased that people were probably "sick" of her.

That was back in September. Since then the Betty White mania seems to have cooled off for a bit, but if the actress proved one thing in 2010 it's that you can't keep a Golden Girl down.