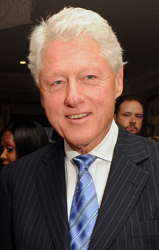 The Hangover Part II has been making headlines for its cameos lately (Mel Gibson's out, Liam Neeson is in, Paul Giamatti has a part), and this latest tidbit is presidential: Bill Clinton will also make an appearance in the movie as himself. Clinton was in Thailand to deliver a speech where the film is shooting and made time to film his brief spot. There's no word on what the former commander-in-chief will be getting up to in the raunchy comedy's sequel, but I have high hopes that it'll be politically incorrect.