Like a ballet performance, Darren Aronofsky's Black Swan begins with a showy opening act and closes with a dramatic finale. What happens in between, as we watch a ballerina named Nina lose herself in her new role as the Swan Queen in a New York City ballet production of Swan Lake, is also a dance of sorts: Nina teeters on the brink of sanity, dances around the subject of her own sexuality, and leaps into a side of herself she never knew existed.

As the Swan Queen, Nina is required to play two parts: the virtuous princess-turned-White Swan and her conniving alter ego. As the story goes, the sensual Black Swan seduces her sister's prince, thus keeping the princess trapped as a bird forever. Nina's fragility and innocence make her ideal for the delicate White Swan, but the company's director Thomas initially casts her aside as too prudish to embody the Black Swan as well. When she shows up at his office to change his mind, she inadvertently taps into her suppressed dark side for the first time, winning her the part and beginning a dizzying, suspenseful transformation.

There's a lot to digest in Black Swan, from Aronofsky's glaring black-and-white symbolism to the reasoning behind Nina's insecurities. In the end, whether or not you enjoy the film might be dependent on what lens through which you view it. To find out what I mean, just read more.

Portman plays Nina like a frightened child who seems to focus on hard work to avoid growing up and embracing the outside world. From the verbal abuse she takes from her overbearing mother to her inability to socialize with the rest of her ballet company, Nina's dancing is all about execution over emotion. She's consistently on edge and on the verge of tears, even when she's pirouetting around the dance studio with the greatest of ease. 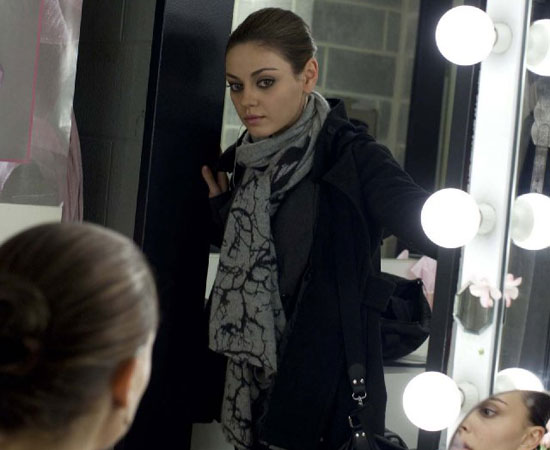 Since Nina is so tightly wound, her counterpoint is easily seen in rival dancer Lily (Mila Kunis). Though Nina and Lily are similar in stature (Nina even confuses Lily for her own reflection at first), Lily literally embodies everything Nina doesn't: She's wild! She's free-spirited! She dances with her hair down! She wears black tank tops! (Nina wears white for the majority of the film). Once Nina recognizes that Lily is the epitome of the Black Swan, Nina becomes paranoid that Lily is trying to steal the role from her. In reality, Nina can't seem to admit to herself that she's fascinated with Lily, and is seduced by the carefree, relaxed life that's so different from what Nina has.

Aronofsky has plenty of fun playing with Nina's psyche and keeping the audience on the edge of their seats. When Nina's not on stage, she's completely vulnerable to (often bloody) hallucinations galore. For each step she takes toward breaking out of her shell, her subconscious seems to punish her with a terrifying vision or mind trick. The movie's score samples music from Tchaikovsky's ballet, but manipulates it to make the film into a suspenseful thriller.

Black Swan is all about duality, and the same can be said for how you perceive the film. Those who can chalk up the overwrought suspense and indulgent sexual scenarios to Aronofsky's creative vision will soak up Portman's performance, the drama, and the many layers of psychological issues. Those that take the film more literally may have a hard time with the one-dimensional characters (even Portman's superb performance feels like it could go even deeper), the pointed symbolism, and the cliches. Whichever side you land on, I can guarantee that Black Swan will leave you with plenty to think about — and talk about — for days to come.

Stars on the Set
Don't Worry Darling, Harry Styles and Florence Pugh Were Finally Spotted Filming Together
by Karenna Meredith 4 hours ago