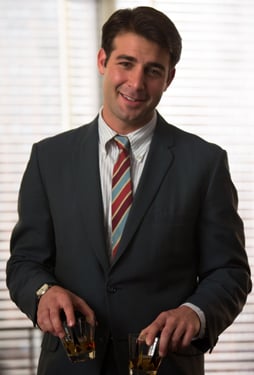 Who is Bob Benson? The overly enthusiastic accounts guy, played by James Wolk, has replaced Don Draper as the most mysterious character on Mad Men this season. In fact, the most recent Bob revelations have us convinced that he may even be the new Don Draper. When Pete has Duck investigate Bob's past, he finds out that he's fabricated it — which obviously makes Pete (and us) recall Don's Dick Whitman/Don Draper switcheroo. This comes after a season of suspicion, including his pass at Pete on last week's episode, and Elisabeth Moss (Peggy Olson)'s recent interview when she told us, "If you think we've answered it, I don't know if we have. It may change." Interesting.

When addressing the character a couple weeks ago, show creator Matthew Weiner told The Wrap, "He's definitely a liar. I hope that you caught that." We did! Here are eight possible explanations for the character who seems like he was written for Internet conspiracy theorists. Just keep reading.

He represents a younger Don Draper.
Through an extended flashback in the season-four episode "Waldorf Stories," we find out how Don Draper got his job at Sterling Cooper. The aw-shucks version of the dark Don we know today uses over-eagerness, a goofy grin, and a little lying to get ahead. After meeting Roger when he stops by his fur shop, Don goes on to get him wasted. Don then shows up at the elevator the next day and tricks Roger into thinking he hired him when he was blacked out. The go-getter attitude and easy lies are recognizable in Bob, who does something similar to Pete this week, deviously convincing him that Pete hired him after Pete finds out that most of his résumé is lies. And he has a name alliteration, too — Bob Benson, Don Draper. It's interesting that both young Don and Bob are also similar to J. Pierrepont Finch from the satirical How to Succeed in Business Without Really Trying, which Bob listens to in "A Tale of Two Cities." That character sets out to work his way up from window washer to executive. And Weiner addressed Bob's ambition, asking, "You don't think he seems like an ambitious person jockeying for a job?"

He's gay.
Mad Men already had a gay character, Salvatore Romano, but some on the Internet have long suspected Bob Benson is also gay. Last week's episode, "Favors," all but confirms this when Bob comes on to Pete with a leg nudge and a speech about "if it's true love, does it matter who it is?" In this week's episode, Bob brushes the incident off, but we find out he once had the questionable title of "man servant." Previous to his interlude with Pete, Bob's lack of participation at the whore house and the platonic vibe between him and Joan is cited as evidence. Also, his short shorts. In the episode "A Tale of Two Cities," Ginsberg also obviously thinks something's up, asking Bob, "Are you a homo?", a question he deflects. Despite all the evidence, though, some still think Bob has more secrets than his sexuality, and Elisabeth Moss says they might be right. And remember the whore house? He went with Pete, so he should know how he swings!

He's Don Draper/Dick Whitman's secret son.
Bob mentions his father twice. First he refers to his father's death in "Doorways," the premiere of season six. Then in "The Better Half," he tells Pete that his father was nursed back to health by an Army nurse. If his father is Dick Whitman (now Don Draper), then it would be true that his father died (during the Korean War in the eyes of the government) but is also alive, thanks to being nursed back to health in an Army hospital. In this current season, Don is 41 or 42, and we know he lost his virginity at a young age. It could be possible that he fathered a son Bob's age. And in "The Better Half," we find out that Bobby Draper is not "Bobby 1" at his Summer camp. Could Bob Benson be the true "Bobby 1"?

He's a juxtaposition to the characters' and our own moral decay.
What does it say about the group of characters on Mad Men that the nice guy sorely sticks out? Or about the audience that we're so suspicious of him? Perhaps nice Bob, who looks out for Joan when she's sick, lends support to despicable Pete, and gives an earnest pep talk to a hysterical Michael Ginsberg, is here to show just how corrupt our friends at the ad agency are.

He's a love interest for Joan.
Don, Roger, Pete, and many more Sterling Cooper men sleep with countless younger underlings over the seasons. Perhaps Bob is here to show that Joan can too. She is the newest partner, after all, and Bob's presence in her life makes for an entertaining story line, especially now that Roger is aware of her relationship with "Bob Bunson." However, later in "A Tale of Two Cities," Joan initially thinks she's on a date with Andy from Avon, suggesting she's not dating Bob, at least not exclusively. And there's also the whole Pete thing.

He's a government spy.
The "Bob Benson Is a G Man" theory has been popular on Reddit for a while now. Considering Dow Chemical, which made weapons during the Vietnam War, is a client of SCDP, the FBI might have reason to keep an eye on the agency, or so the theory goes. Or, the feds could be investigating Dick Whitman's desertion from the Korean War and identity theft, which comes close to being revealed when Don fills out a clearance form in order to represent North American Aviation in season four. Weiner also acknowledged this theory, saying, "I'm not going to comment on whether or not he's a government spy, but James is a great actor, and he is definitely mysterious. And that's deliberate."

He's a corporate spy.
Bob Benson might be engaged in corporate espionage, a growing practice in the '60s. He could be sent on behalf of competing agencies, which might explain why he's always standing around, seemingly eavesdropping. Last week, Jim Cutler shouts at Bob for always lurking downstairs when he should be upstairs working. And he's definitely digging up some personal dirt, including Pete's liaisons with prostitutes and Joan's connection with Roger. Whether he's a government or corporate spy, that could also explain his need to make up credentials.

He's an investigative journalist.
SCDP, and Don Draper specifically, have long attracted the attention of the press. And Don himself courts it in season four's "Public Relations," when he tells a Wall Street Journal reporter that he defines the agency. It's plausible that a reporter might want to look into who exactly is Don Draper. If that is what Bob is doing, then there's a chance he'll discover Don's secret by getting close to Pete, who knows Don's true identity.