When the teaser for The Bourne Legacy dropped months ago, we got a glimpse at the latest chapter in the lauded action franchise, but the new, full trailer gives us a much better idea of the storyline, including Treadstone's remaining ties to Jason Bourne. Although Jeremy Renner is taking over as leading man, it seems that Matt Damon's character is still hanging around Manhattan . . . sort of. We also get a deeper look at Renner's character, Aaron Cross, who volunteers to be a subject for the program and ends up getting more than he bargains for. And by that I mean they alter his chromosomes, making him a supersoldier. 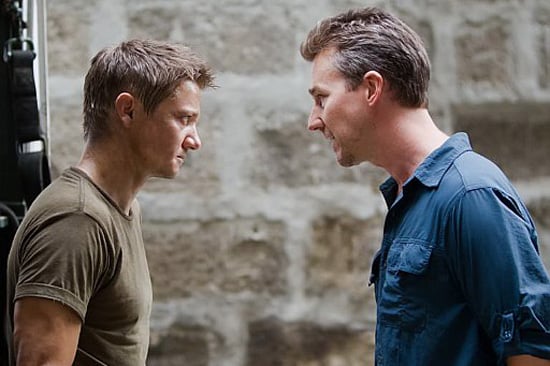 The addition of Renner, Rachel Weisz, and Edward Norton make Legacy feel like an entirely different franchise. That's not to say I'm not excited; with a few other action flicks like The Avengers already on his résumé, Renner seems like he's got the skills to perform the stunts, and as far as I'm concerned, every movie is better off with Edward Norton in it. The biggest question is, given how much of the story seems to revolve around Jason Bourne, will Damon be making a cameo? The flick comes out Aug. 3, but to watch the trailer, keep reading.

Shirtless
After Seeing These Pictures of Resort to Love's Sinqua Walls, We're Going to Need a Minute
by Grayson Gilcrease 1 hour ago

Margot Robbie
A Hose, a Kiddie Pool, and Other Products The Suicide Squad's Makeup Team Used on Set
by Danielle Jackson 22 hours ago

Steven Yeun
We Don't Know Much About Jordan Peele's New Horror Film, but the Poster Offers Some Clues
by Kelsie Gibson 6 days ago