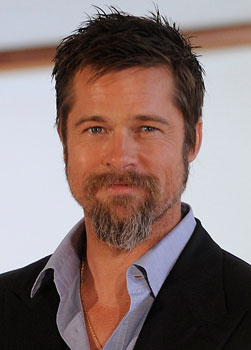 Good news for those of you who love the Ocean's 11 franchise like I do: Brad Pitt is eyeing another role in a heist comedy. He's in negotiations to produce and star in Cogan's Trade, a crime comedy that would have Pitt reteaming with his Assassination of Jesse James director, Andrew Dominik. Pitt will play a mob enforcer who gets put to work during a poker game heist. His Jesse James costar, Casey Affleck, may also join the ensemble cast.

Pitt seems like a better fit for a pretty boy (obviously) than a thug, but his prior experience in ensemble heist movies like Snatch should be plenty of experience for his newest role. Can you see Pitt as a mafia man?

Aubrey Plaza
You're Not Alone: Aubrey Plaza Wants People to Root For Riley and Abby in Happiest Season
by Karenna Meredith 17 hours ago