We met Princess Merida (Kelly Macdonald) when Pixar released the teaser trailer for Brave back in the Summer, but now we're getting a better look at the animated leading lady whose personality seems just as fiery as her wild mane of red hair. Despite her royal background, Merida isn't sitting around waiting for Prince Charming. 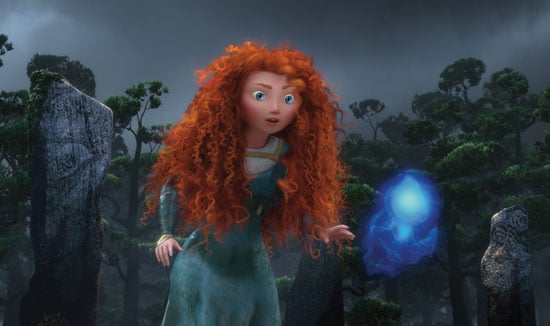 Merida turns the kingdom's world upside down when she ignores its customs, and it's up to her to make things right by embarking on a dangerous adventure. I'm always a fan of girl power, especially when it's geared toward a younger audience, and Merida seems to have just the right amount of sass and bravery for Pixar's first heroine. Take a look for yourself when you watch the trailer.

Netflix
Hold on Tight, Spider Monkeys — All 5 Twilight Movies Are Coming to Netflix Next Month
by Victoria Messina 14 hours ago

Movies
The Shazam Family Is Bigger and Better Than Ever in the Sequel: Here's Everything We Know
by Grayson Gilcrease 14 hours ago

Music
Welcome to the Space Jam: Here's Your Chance to Check Out the Songs From the Sequel
by Grayson Gilcrease 16 hours ago

Disney
In Magical Casting News, Rachel Zegler Will Be Playing Snow White in the Live-Action Film
by Kelsie Gibson 18 hours ago