Before Bill Condon was confirmed to direct Breaking Dawn, there were already plenty of concerns about how the fourth Twilight installment, with its myriad challenges, would translate to film.

Perhaps to quell concerns about the book's adaptation, Condon has taken to his Facebook page and posted an open letter to fans. The director is mainly assuring us that he's educating himself on all things Twilight and that he'll be more than able to shift from the musical films he's known for into the dark work that Breaking Dawn has to be. 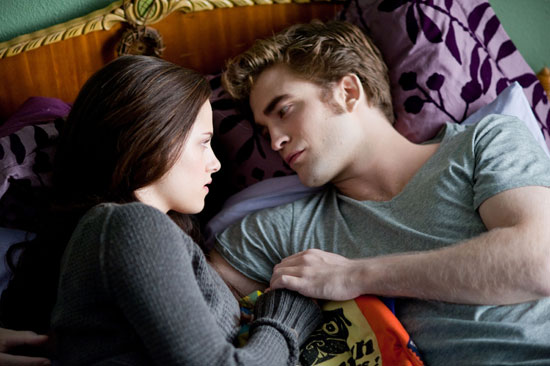 Read the letter, and let me know whether it soothes any of your fears about the last films, but most importantly, tell me what you're most concerned about regarding Breaking Dawn. Afraid certain scenes won't make it in? Or that certain ones will? Let it all out here! But first, the letter:

I just want to say hello to all of you and let you know that I'm stoked to be getting underway on the adventure of making BREAKING DAWN. As you've probably heard, I've been given a very warm welcome by Stephenie and Team Summit — who are super-focused, as you know, on getting these movies right.

To read the rest of Condon's letter, just read more.

I'm pretty busy bringing myself up to speed on what you already know by heart: I've read BREAKING DAWN twice, rewatched Catherine's and Chris's movies 2-3 times each, have all four CDs playing in my car, and have Catherine's notebook, Mark Cotta Vaz's companion books, and even Volume 1 of the graphic novel here on my desk — a corner of my office is starting to look like Hot Topic. I realize that this barely qualifies me for "newborn" status in the universe you've been living inside for a few years now, but a guy's gotta start somewhere.

Like many of you, I've always been slightly obsessed with vampires, dating back to the prime-time series DARK SHADOWS, which I followed avidly as a kid. But that alone hadn't been enough to get me interested in making a vampire movie, even though my early screenwriting and directing efforts grew out of a great love for horror movies and thrillers. Since making GODS AND MONSTERS thirteen years ago, however, I've been yearning for a return to a story with Gothic overtones.

The wonderful world that Stephenie has created has obviously struck a chord with you, and I don't think it's difficult to see why. For me, her characters are simultaneously timeless, yet very modern. Rooted in a beautiful, real landscape with a great sense of place, Bella, Edward, Jacob, and the rest of the Forks/La Push menagerie, experience emotions that are primal, and universal: desire, despair, jealousy — and it all comes to fruition in BREAKING DAWN. This is a final chapter in the best sense; not just wide in scope and scale, but emotionally charged and intense throughout.

I'm a huge admirer of the already-iconic Kristen, Robert, and Taylor, and wanted to be the one to work with them as they face the challenges of bringing your beloved characters to the end of their journeys. Really, what could be more fun than that?

Please feel free to ask questions in the comments section below, and I'll do my best to answer them. I hope that this will be the first of many occasions I'll get to check in with you as we set to work bringing BREAKING DAWN to the screen. I am excited and grateful to have all of you alongside me for my TWILIGHT journey.

P.S. Answer #1: No, there won't be any musical numbers