Let's be honest: the standards for Breaking Dawn Part 1 are not high. All we want as fans is a satisfying conclusion to an addictive guilty pleasure, and considering the titillating content of the fourth book (Wedding! Sex! Hybrid vampire baby!), the film version has to do very little to please its audience. Sadly, it feels like Part 1 is grossly imbalanced; certain aspects are lazy while other scenes are over the top. Though Breaking Dawn has the most theatrical elements of all the movies, the film is disappointing — and often, just plain bad. 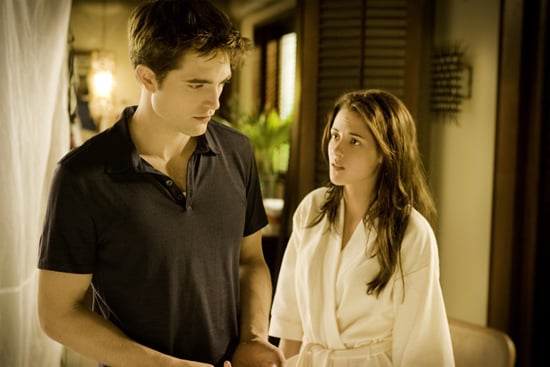 The movie begins with Edward and Bella's wedding, and then we follow them on a honeymoon full of passion — and problems. The couple manages to have sex for the first time, but Edward's vampiric strength leaves bruises all over Bella's body. After they overcome that hurdle, Bella faces another one when she makes the classic mistake of eschewing birth control because she's assumed her vampire mate is shooting blanks. He's not, though, and Bella's suddenly pregnant, but no one is quite sure what's growing inside her. Science and legend have no explanation, but everyone can see that Bella is getting weaker by the second. Unless Edward can turn her into a vampire during childbirth, she may be gone forever. It's a pretty wild premise that was shocking to read, and even crazier to see — and not in a good way. To read about my issues with the film, just keep reading.

Where The Twilight Saga films have been almost chaste with gore and violence, Breaking Dawn doesn't hold back. As the baby grows at a rapid pace, Bella soon learns that her body can't handle the fetus. As it begins killing her from the inside, things get really gruesome: she's drinking blood, her bones are breaking, and her body is emaciated. These are disturbing visuals that could have benefited from being a little less loyal to the book. I found myself wanting to cover my eyes and wondering why certain scenes had to be so graphic.

The script is even more cringe-worthy than the carnage. I expected much of the dialogue to be cheesy, but Breaking Dawn outdoes itself. I'm willing to forgive the sticky-sweet declarations of love that come with marriage and everlasting devotion and all that (the girlie part of me genuinely enjoys that anyway), but many of the lines are so poorly written that they make the bad acting even more awful. 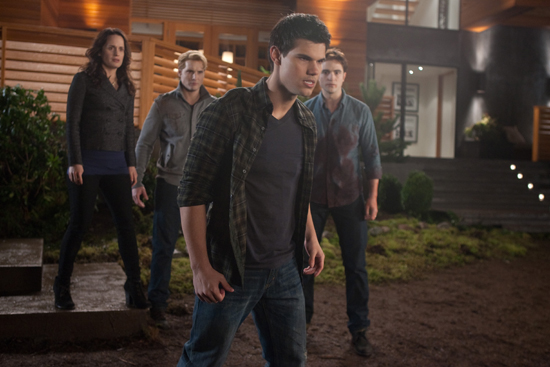 While the Twilight films generally seem to improve from one to the next, director Bill Condon tries to up the ante with some elements that didn't necessarily need fixing. A prime example: the werewolves' ability to talk to each other telepathically. None of the other directors attempted to portray this before, and I assume it's because they realized that it would be a laughable mistake. That point is proven with Breaking Dawn, and the extended scene of wolf-talk is pure ridiculousness.

The imprinting scene is similarly atrocious, but I realize there's only so far that you can stray from the source material. The novel certainly deserves part of the blame for Breaking Dawn's faults, but the adaptation fails in places that have nothing to do with the book. The score is weak, and the makeup and hair dye are worse than ever (I don't even know why they pretend that Jasper, Carlisle, and Rosalie are blonds anymore).

I had hoped that by the fourth film, we'd be getting the best adaptation in the Twilight series, but Breaking Dawn Part 1 is a roller coaster that starts as a dreamy fantasy for two beloved characters and devolves into a bloody mess.