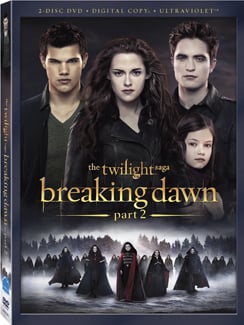 Bella (Kristen Stewart) and Edward (Robert Pattinson)'s saga comes to an end in this lackluster conclusion to the Twilight films. After giving birth to their half-human/half-vampire child, Renesmee, Bella makes a fast recovery and adjusts to her new vampire prowess. Soon enough, the entire Cullen clan must face up to the Volturi, who suspect Renesmee was illegally made into a vampire child. The battle scene is a thrilling climax, but unless you're a Twilight devotee, there's not much else to see here. The DVD comes with several featurettes, a music video, and director commentary.

Joaquin Phoenix stars as a troubled war veteran who has difficulty adjusting to everyday life after returning from the war — until he finds a charismatic man (Philip Seymour Hoffman) who promises to restore him to sanity. Though the man and his family have questionable methods and philosophies, the two forge a unique bond. Amy Adams also stars in this intense, puzzling drama from Paul Thomas Anderson. DVD extras include footage not used in the film.

Check out one more new release after the jump.

This emotional surfing film tells the true story of Jay Moriarty (Jonny Weston), a young surfer who is begrudgingly taken under the wing of seasoned professional Frosty Hesson (Gerard Butler). As Frosty helps train Jay to undertake a legendary Southern California wave, they become close, teaching one another as they go. Though the surf scenes are heart-pounding, the plot is nothing new, and neither is the movie as a whole. The DVD includes writer commentary, deleted scenes, and a few featurettes.