Until now, the Twilight story has revolved around the Romeo and Juliet-esque romance between a stoic vampire and a swooning human. Not anymore. Breaking Dawn Part 2, the final chapter of the film series adapted from Stephenie Meyer's novels, is a whole new ball game, as Bella (Kristen Stewart) has completed her transformation from fragile, lovestruck teen to powerful newborn vampire and mother. Whether you'll enjoy Breaking Dawn Part 2 really depends on what your stance is on the film's predecessors, because it really is standard Twilight. It's more of the same bad special effects, cheesy dialogue, and laughable moments during tense intervals. 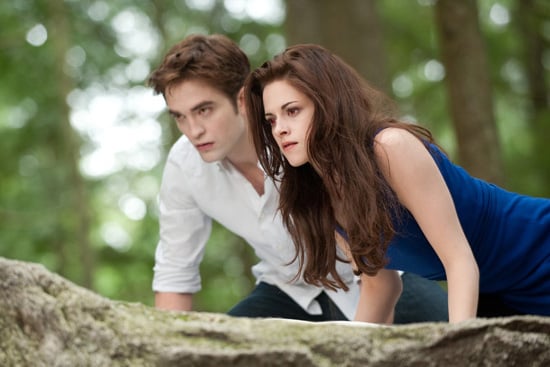 The movie opens following the birth of baby Renesmee, but because she's half vampire, she's growing out of the toddler stage pretty fast. Bella has recovered from that time she was dying (a couple days ago) and is having trouble keeping her fangs out of nearby hikers. Edward (Robert Pattinson) comically watches as his new bride adjusts to her powers and grapples with the news that Bella's BFF Jacob (Taylor Lautner) has "imprinted" — that's a werewolf way of saying he's formed an unbreakable bond — on little "Nessie." Alas, their family bonding time is cut short when the Volturi, headed by creepy-guy extraordinaire Aro (Michael Sheen), get word of Renesmee. They mistakenly believe her to be an "immortal child," and making children into vampires is a big no-no in the vampire world. The Cullens call on all their friends and family throughout the world as witnesses to their daughter's true nature, and meeting all these unusual new characters is one of the film's highlights. Find out what else I took away from the film when you read more.

Twilight fans have probably grown accustomed to the bad acting that remains consistent throughout all the films, and while Breaking Dawn Part 2 has more than its fair share of over-the-top lines delivered poorly, a couple of the actors make their mark. Lee Pace stands out as one of the Cullens' witnesses, a jaded, centuries-old "survivor" who's no stranger to the battlegrounds, it's a pleasure to see Sheen delight in playing the intimidating Aro once again. After several movies, he and Kellan Lutz (who plays Edward's "brother" Emmett) seem like the only main players who are having any fun on set anymore.

The film does have a thrilling climax, as the battle of good and evil commences with an epic action sequence. Though the special effects are a bit lacking, the fight is gasp-worthy. I wish they would have allocated more time to the special effects in the action sequence and less time constructing baby Renesmee with CGI. Mackenzie Foy is adorable as the child version of Renesmee, but the computer-generated baby is distracting and, frankly, pretty creepy.

It's hard to believe it's been four years since Bella and Edward first locked eyes in the cafeteria. It's been a long journey, and though Breaking Dawn Part 2 is by no means a great movie, it at least remains true to form. After five films, the franchise is thankfully not above getting a laugh or two at its own ridiculousness, yet this final adventure is an earnest enough send-off to satisfy fans who do take this love story seriously.