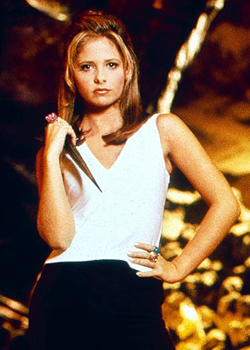 We first reported on a possible Buffy the Vampire Slayer reboot over a year ago, but there's an update, folks! The latest news on the project reveals that the film has found itself a writer — and nope, it's not Joss Whedon.

Before you toss your computer in disgust, hear me out. At work on the script is 29-year-old Whit Anderson, a writer and Buffy devotee who says she grew up watching the series. She will spin the cult favorite into a new version (much like Batman Begins did for Batman), while retaining the "touchstones" Whedon created.

Buffy Summers has always been one of my favorite characters, but that's largely due to Whedon's snarky dialogue and the pop culture references that made the TV show so sharp. Hopefully, Anderson will keep some of that intact to please fans. Do you have faith in the reboot?