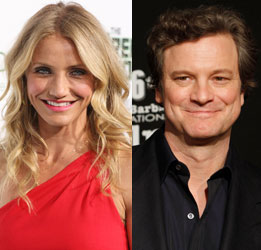 Ready for the latest news in the exciting world of Hollywood remakes? Cameron Diaz and Colin Firth have signed on for Gambit, taking over for Michael Caine and Shirley MacLaine, who starred in the 1966 version of the comedy. Firth will play an art curator in London, who tries to sell a fake painting in order to make a bundle; Diaz will play a Texan woman who abets his crime. Fans of the original, how do you feel about this casting news?