Will Ferrell and Zach Galifianakis are two of the funniest comic actors in the game, and pitting them against each other as political candidates in The Campaign seems like a stroke of genius. The two men should be at their best, challenging each other as comedic actors in a parallel to their characters' onscreen sparring. Unfortunately, neither actor wins this race, because the script is mediocre at best and wastes the talent of its leads. 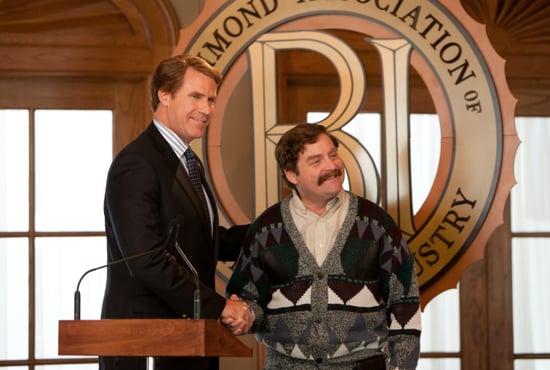 Ferrell stars as Cam Brady, the incumbent US congressman of North Carolina, who's set for another term — until the diabolical Motch Brothers (Dan Aykroyd and John Lithgow), a pair of greasy entrepreneurs, get involved. They want to put a new candidate in office for their own selfish purposes: they need a pawn who will support laws that will allow them to do shady business. They set their sights on simple, small-town Marty Huggins (Galifianakis), and groom him with the help of a conniving campaign adviser (Dylan McDermott). The political plot is about as stimulating on screen as it sounds on paper, so it's up to the jokes to make the movie entertaining. Sadly, the humor is as dumb as Cam's nonsensical stump speeches. To find out what else I thought of The Campaign, just keep reading.

The problem with Galifianakis's and Ferrell's performances starts with the fact that the characters feel too similar to those we've seen them play before. Ferrell's dim-bulb Cam is too close to his famous George W. Bush impression, while Galifianakis has pretty much exhausted every angle of the well-meaning doofus (here, he at least adds a Southern accent, which is admittedly funny when you first hear it). On the upside, he is able to gain sympathy as Marty, a guy who's in over his head in the political world and losing sight of himself, but it's not enough to make the character fresh.

McDermott, on the other hand, is an unexpected delight. He isn't known for his comic prowess, but he's perfect as a manipulative political adviser. He's wickedly funny, even in simple gags like sneaking up on other characters. He's easily the best part of the movie — which isn't exactly an endorsement for the film, considering that McDermott is a mere supporting player.

As the movie follows Cam and Marty on the campaign trail, the suspense about who might win fails to build. It's slightly interesting to see the evolution of Marty as he discovers what he has to do to get ahead. But on that note, the movie fails to get the maximum humor out of its source material. Not only does it fail to exploit the fruitful landscape, but also, the other jokes are either stale or unnecessarily gross. American politics has so much potential for skewering, but The Campaign retreads jokes that have been made a million times (I rolled my eyes at the many politician/sex scandal gags). The fact that Ferrell and Galifianakis are the ones delivering the weak laughs only adds to the overall disappointment, because we all know they can do better.

Lady Gaga
The House of Gucci Posters Could Say I Have Terrible Taste in Fashion, and I'd Say, "Thank You"
by Grayson Gilcrease 15 hours ago