Alia Shawkat swung through NYC this week on a busy press tour for her new movie Cedar Rapids, which we previewed last month at Sundance. She plays Bree, a prostitute who enjoys a sordid entanglement with Ed Helms's straight-laced insurance salesman character, in the film directed by Youth in Revolt's Miguel Arteta. Shawkat talked about getting up close and personal with Helms and also addressed the long-running rumors about an Arrested Development movie that have regained steam after the series' creator, Mitch Hurwitz, confirmed his involvement. She also had some interesting ideas for her character, Maeby. Check it out. 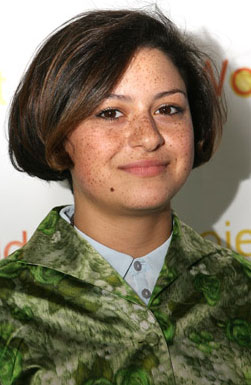 BuzzSugar: In this film, you're playing a prostitute, which is new territory for you. What drew you to this role?
Alia Shawkat: "I got a call from [Miguel, the director] and he was like, 'Alia, I want you to play a prostitute!' And I was like, 'Ok!' And it kind of went from there. . . She’s a hooker with a heart of gold so it was fun. I got to do some research — not go out on the street! — but watch films with hookers with hearts of gold. And I got to say some weird dirty things.

BS: You also got to do some crazy things. Was that another perk to this role?
AS: Doing the meth and dancing, and doing real meth — no we didn’t do that! It was really fun. That’s what’s so cool about being an actor, you get to live so many different lives. This one upped every character I’ve ever played.

BS: You and Anne Heche were pretty much the main ladies in the film. Did you two take on the boys comedian club together?
AS: I’m used to being around a lot of male comedians, so it is kind of like a boys club in that you have to sort of earn your say. But after they started hanging out with us for a little while and they see we aren’t just like, 'Oh, tee hee that’s funny!' that we’re funnier than them sometimes, then they start to respect us. They’re all very sweet guys, most comedians are. They’re just a little pervvy.

BS: And of course, the leading man was Ed Helms. How was it working with him?
AS: I was expecting Ed to be a lot dirtier in comparison to some of the other comedians I’ve worked with, that are usually pretty dirty. But he’s such a gentleman, an old Southern boy. He's very polite and respectful with women.

To find out who's on Shawkat's list of dream costars and what she'd like to see happen for Maeby, just read more.

BS: That's always good to hear!
AS: I remember one scene in the bathroom, Miguel would sometimes tell one of the actors, ‘Surprise me and do something!’ He told me, ‘I want you to surprise me and surprise Ed.' . . So we’re in the bathroom, and you don’t see me — just the back of my head, and I grabbed his crotch, like grabbed it tight, and he’s supposed to be on meth and he got this amazing look on his face. And afterward he was so pink and blushed, and he was like, ‘I didn’t know you were going to do that! I didn’t know you were going to do that!’ And was all giggly.

BS: Everyone of course wants to know about the Arrested Development movie now that Mitch Hurwitz said it's on. What can you say about that?
AS: I think it’s very exciting that he said it publicly! It would be great I think it's still kind of in the limbo of we’re in the dark still. But all the cast members, everyone I’ve seen recently, said we’re in! We haven't been sent a script or anything cause he’s still working on it. It’s pretty much the same thing, we just hope it happens but we’ll see when it comes to fruition. But hopefully it’s soon. That was kind of a nice thing, his saying it’s coming out soon. Once we read it I think everyone’s going to be in.

BS: Are you looking forward to all the changes for the characters?
AS: That’s the weirdest thing, and something that’s so exciting about the prospect of a movie. Every episode we had no idea what would happen to the characters. Week to week we’d be like, ‘What the shit do I have to do? Ok, whatever!’ And now that so much time has passed, and so much is going to already have happened to the characters, they’re going to have to kind of explain where they are at. I have no idea what to expect, and that’s what’ so exciting about it. Unlike any other writer, Mitch is just so out there that it’s thrilling and exciting to see what will happen.

BS: What would your dream for Maeby be?
AS: My dream? I don’t know. It could be cool to do something fun, like if she got a sex change or something.

BS: And you've worked with so many great comedians already — any one left on the list?
AS: Everybody! I’d love to work with Bill Murray. That would be really fun. I don’t know if he’d like me very much. Gary Shandling, I don’t know if he’s doing a whole love of movies now, but The Larry Sanders Show was one of my favorite shows.