It's The Office meets The Hangover in this trailer for Cedar Rapids, a new comedy starring the man who appears in both: Ed Helms. Helms plays Tim Lippe, a small town insurance agent who ventures to the big city — the "big city" being Cedar Rapids, IA — for a work convention. Tim soon learns that he's in way over his head as a few convention regulars (John C. Reilly and Anne Heche) teach him the ropes (translation: they get him hammered). Before you know it, buttoned-up Tim is befriending prostitutes and raising hell. 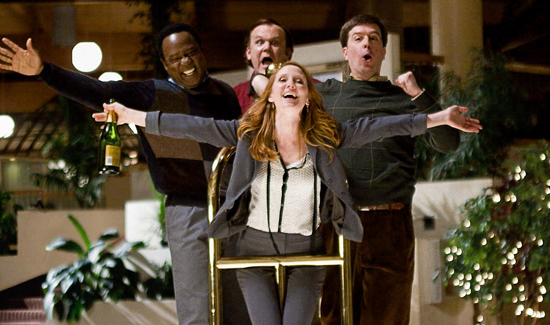 Helms hasn't really carried a film by himself before, but this looks like a promising effort: funny with a tinge of darker humor to it. Of course, it helps when you have Reilly's over-the-top character to bring out the hilarity in Helms's more straight man persona. Cedar Rapids will show at the Sundance Film Festival next month, so stay tuned for more about the movie. But until then, check out the trailer after the jump.