Adam Levine, Christina Aguilera, CeeLo Green, and Carson Daly descended on the TCA stage to talk about their recent "family" reunion on the upcoming season of The Voice. The three judges were down one member, as Blake Shelton was out on the road, but that didn't stop them from spilling about their dynamic behind the scenes (Aguilera: "There's another show that happens behind the show that's . . . for another network") and why they don't agree with criticism that their show hasn't launched successful singers. 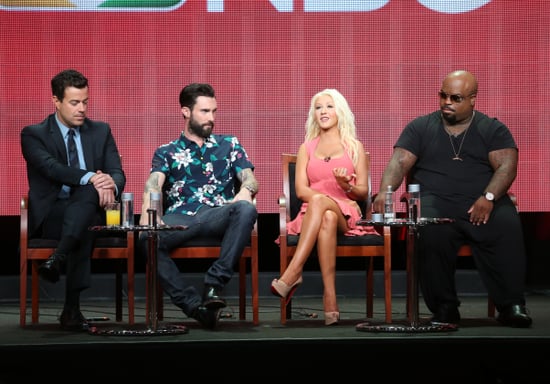 Billie Eilish
There's No Other Way to Put It: Billie Eilish's Grammys Performance Was Beautiful
by Brea Cubit 7 hours ago

Grammy Awards
Yes, We Were Also Mesmerized by Tyler, the Creator's Grammys Performance
by Brea Cubit 9 hours ago