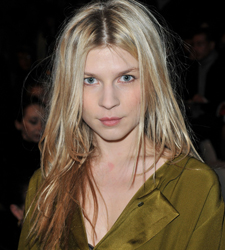 You may recognize Clemence Poesy as young sorceress Fleur Delacour from the Harry Potter franchise, but she'll soon be putting a spell on Gossip Girl's Chuck Bass. The French actress has signed on for a guest spot on the series, where she'll portray a paramour for the heartbroken bad boy. According to the CW: "Season four will open with a radiant Serena and Blair enjoying their grand and romantic summer in Paris . . . until Chuck mysteriously arrives in town with a new girlfriend and a new identity." Ooh-la-la!

Bulgari
Mj Rodriguez Sketched Her Own Emmys Dress, but Turns Out, It Was Already in Existence
by Sarah Wasilak 5 hours ago

Billy Porter
Billy Porter May Be Wearing Wings, but Flying Would Be a Challenge in Such Heavy Diamonds
by Sarah Wasilak 6 hours ago