Sam Raimi, the director of Oz: The Great and Powerful, joined stars of the film, Michelle Williams and Mila Kunis, and producer Joe Roth at a press conference at Comic-Con to chat about the upcoming film. In the Wizard of Oz prequel, Kunis plays Theodora (who eventually becomes the Wicked Witch of the West), while Williams plays her counterpart, Glinda (the Good Witch), and each shared about their experience of working on the fantasy blockbuster. Raimi also gave us a few more details about the movie (the trailer for which was also unveiled at Comic-Con!) and about star James Franco, but it wasn't all Oz talk; Williams also gamely chatted about a Dawson's Creek reunion! Here are the highlights: 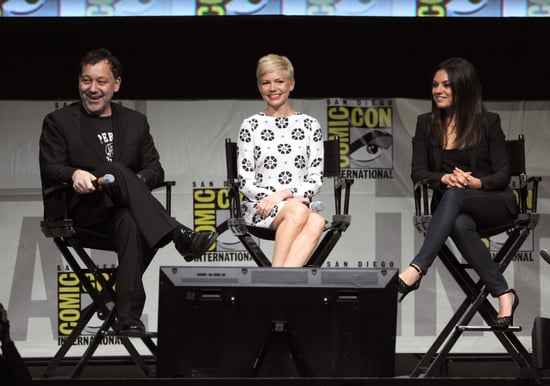 On the story:
Sam Raimi: "This is a very straightforward family picture. I would say it's a very classically Disney type of movie. It's all about these characters and their interactions with each other, the friendships they make. How some characters are sinners, how they hurt others, how those sins can grow. It's about finally recognizing the things you do in this world have consequences, and how to be the best person you can be is really the story of this film. That's the most exciting kind of story for me, the ones that have character growth, and I think James Franco's character has a little bit of character growth in this film."

On the honor of working with director Sam Raimi:
Mila Kunis: "Listen, Sam is fantastic. I don't know where to begin. I would do craft service for Sam if he asked me to."
SR: "Would you do craft service?"
MK: "Yes, Sam Raimi! . . . He's so supportive of everybody around him, of his crew, and of his cast. He is incredibly inspiring to work with. You go to work and you want to make him happy."
Michelle Williams: "I had never made a movie like this before. I've never made such a big movie before. I didn't know what it was going to be like. I didn't know if the things that concern me, Sam would have time for, or patience for. Not only did he have time and patience in the beginning when we were rehearsing, he had patience for them on the 17th hour of the sixth day. For me it was a very holistic experience; it was a real melding of my work life and my personal life. My film family and my real family."

On working with beautiful actresses like Williams and Kunis:
SR: "Wow [growls jokingly]. It's great to work with them because they're great actresses. As beautiful as they are, that would become meaningless if they weren't brilliant actresses, and that's what we needed for the story. They both have complex roles and complex interactions with the other characters in the piece and they just do a beautiful job performing them. It's very funny and realistic and they are a pleasure to watch. And yes, they are not hard on the eyes, those girls."

On how Franco has changed since working on Spider-Man:
SR: "He's a great collaborator. James was much less collaborative when I first worked with him. He was a real serious actor, I think he still had his James Dean hat on; he was doing it his way. I worked with him with certain limitations. We couldn't communicate about everything as deeply as we did on this picture. [In this movie] there was a great sense of openness, collaboration, and patience. Now that James is a filmmaker, he understands all the things that go into a shot. He's developed that patience."

To get some more details on the film and what Williams said about a Dawson's Creek reunion, just keep reading.

On the differences between this movie and The Wizard of Oz:
SR: "We were careful to respect it. Really ours is a different story. It leads up to it — how a slightly selfish man became a slightly more selfless man. It's not really remaking The Wizard of Oz, so it wasn't a problem we had to deal with. We just nodded lovingly toward it."
Joe Roth: "In the simplistic parlance of movies, it's a prequel, not a remake."

On whether there are flying monkeys like in The Wizard of Oz:
SR: "In the teaser they showed today, the Wicked Witch has an army of flying baboons. We're actually still developing them, but the teaser demanded that they come out right now. There is also a flying monkey in the story, different than the baboons, a nice flying monkey, so don't worry."

On whether the movie is funny:
SR: "We have a main character, James Franco, who is a little selfish as the story begins. As he runs up against those he admires, such as Glinda, his shortcomings are a source of humor."

Mila, on paying homage to her iconic character, the Wicked Witch:
MK: "I wasn't paying homage. You can't. You could never replicate it, nor would you ever want to. She's so iconic, so fantastic in her own right. I was scared going into it. Truly, I was frightened. What do you do? The only thing I could do was be honest to the character. I was given the gift by Sam of having a backstory of why she is the way she is. I went in playing her as real as possible. As long as you believe it, I believe it, and hopefully everybody else will believe it."

On whether the book Wicked was taken into consideration in developing this movie:
JR: "No. We were just using Baum's books as a road map. We stayed with the thesis: who is that guy behind the curtain?"

Williams, on the possibility of a Dawson's Creek reunion:
MW: "I would very happily do a reunion show. I don't know what it would be. . . . My character dies in the end. So there are certain limitations for me. It's either I come back as a ghost or am shot through a gauzy, hazy light, as my 19-year-old self. [But] at some point, I hope it does happen."

Movies
The Suicide Squad Isn't a Sequel . . . But It's Not a Reboot Either
by Amanda Prahl 5 hours ago