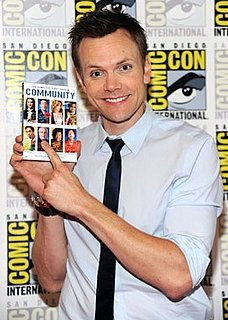 The cast of NBC's Community experienced their first Comic-Con this year, and their reception left them overwhelmed: they were welcomed with a standing ovation from the crowd, which brought star Gillian Jacobs to (happy) tears, and set the tone for an upbeat, love-filled atmosphere. Of course, it wasn't all hearts and flowers from the actors of one of TV's quirkiest comedies; there were plenty of hijinks and quite a bit of goofing off from everyone. Here are the highlights:

To hear more about the Community panel, just read more.

Be sure to check out all of my Comic-Con coverage from this year's event!