Donald Glover plays the lovably innocent Troy on NBC's Community, but it sounds like his character is going to be growing up when the show returns. We caught up with Glover at the Summer TCA press tour, where he gave us some teases and insight into what's in store for season three. From guest stars like John Goodman to new movie parodies, to a faceoff between Troy and Jeff, here's what Glover revealed about Community: 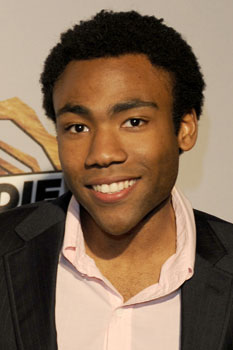 BuzzSugar: Let's talk about the John Goodman and Martin Starr additions to the cast. Have you started working with them yet?
Donald Glover: Martin Starr? I didn't know that! I knew about Michael K. Williams. It's weird having John on there . . . both of them are so nice already, but John was shooting all day and I wasn't in the scene with him. And I was like, "Oh, I really want to meet John," and he got up and he came all the way to our set, he was shooting on the other side, he walked all the way there just to say hello because he heard that I wanted to meet him. Which is out of this world. And then Omar — Michael K. Williams — is Omar from The Wire, and he's really hardcore, but it's really weird to see Omar be like, "Listen up you . . . oh, what's that word? I'm sorry, I'm trying to remember." Like he's an actor! It's crazy, but both of them are pretty great. I love both of them.

Buzz: Has it changed the dynamic at all? Because it seems like the cast already has a really good relationship.
DG: Nah, not really. We're very accepting of everybody else, and I don't think they spend enough time there to interrupt anything that we have. We're very close.

Buzz: What's happening with Troy next season?
DG: This is a lot more me against Jeff [Joel McHale], because I'm getting older and becoming more of a guy. It's just dealing with those kind of ideas, like Jeff feels like he's getting older, and we butt heads a lot, as far as who's in control. He's definitely the alpha male, but I'm an alpha male too, I'm just younger. It's kind of like with your dad.

Buzz: Can there be more than one alpha male?
DG: There can't be, that's the thing. Someone's an alpha male until they're not anymore. It's kinda like when you live with your dad and he's the alpha male, but there's a point where it's like "I can beat you up!" There's a point where you're just like, "You're an old dude." I think that's interesting to watch, and Dan [Harmon] is really good at making that dramatic.

Keep reading to see what Glover had to say about Pierce backlash and why there won't be a Back to the Future episode.

Buzz: Can we expect the Pierce backlash to continue this season or will it be left behind?
DG: It's not left behind, but I think that's getting dealt with. And it's weird, a lot of people will say "Pierce is an assh*le," and I say "Yeah, you guys have never met assh*les?" That's what happens. People are assh*les. We're a family, and there are assh*les in families all the time. Like every one of us has an uncle that you don't want to hang with. I don't believe that every character on our TV show has to be likable. It's a well-rounded show.

Buzz: It's interesting that you cling to that aspect of reality when Community delves so much into the absurd.
DG: It gets very absurd, but there's no magic on our show. There's a claymation episode, but that was all going on in [Abed]'s head. It's different. In the cutaway episode, they show how lame that was for us, just sitting there, pretending. Like the zombie episode, that was a virus. I really want to do a Back to the Future episode. It's probably impossible to do it, because that involves magic.

Buzz: Are there other special, one-off episodes coming up?
DG: [Cryptically] Yes, the one we read today I really like. It's really cool.

Buzz: Are you allowed to tell us anything about it? One word?
DG: Timeline. That's all I can say. But it's awesome.

Buzz: Can we get two words? Does it have some kind of pop culture significance?
DG: Yes, absolutely.

Buzz: Can you say one more word?
DG: It's a movie. That's all I can tell you!