Hope Springs, Butter, and V/H/S are also available on DVD this week. 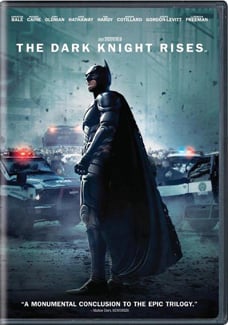 Director Christopher Nolan brings his Batman trilogy to a stunning conclusion with The Dark Knight Rises. Christian Bale reprises his role as the masked vigilante who must break out of reclusion to again fight for the safety of Gotham. This time he's battling against Bane (Tom Hardy), a madman who has motivated a whole army to fight against the city's upper class. The film earned accolades not only for its A-list cast (Joseph Gordon-Levitt, Marion Cotillard, and Anne Hathaway all join), but also for its tight storytelling and jaw-dropping visuals. The DVD contains a featurette called "The Journey of Bruce Wayne."

The Odd Life of Timothy Green

Jennifer Garner and Joel Edgerton star as a couple unable to conceive, who magically find the son they've always wanted has appeared to have literally grown in their backyard. Though they're initially confused, they embrace Timothy, who is ambitious, talented, and contains all the qualities they could have hoped for. The story is cute but its also unavoidably schmaltzy and is likely to trigger tears form viewers both old and young. The DVD includes a music video from Glen Hansard and deleted scenes.

Beasts of the Southern Wild

Six-year-old Hushpuppy (Quvenzhane Wallis) lives in The Bathtub, a sprawling postdisaster flood land. Though The Bathtub's residents, including her father (Dwight Henry), imbibe to the point of alcoholism and everyone lives in extreme poverty, there's a sense of community. When authorities attempt to evacuate the zone, Hushpuppy escapes, using her imagination to create an unbelievable world and embarking on an extraordinary adventure. The film's story, and the performances by its novice actors, is remarkably unique. The DVD comes with deleted scenes and commentary from director Benh Zeitlin.

Harry Potter
I Am a Harry Potter Fan, but Now I'm Rethinking Everything
by Tara Block 19 hours ago