Bringing back a 1960s TV series about a vampire sounds like a perfect job for director Tim Burton, who became a modern master of cinematic goth with movies like Batman, The Nightmare Before Christmas, and Sleepy Hollow. But even with star and frequent collaborator Johnny Depp, the film adaptation of Dark Shadows fails to live up to Burton's previous work. Sadly, it feels more like a lazy, scattered project from someone trying to imitate Burton's style. 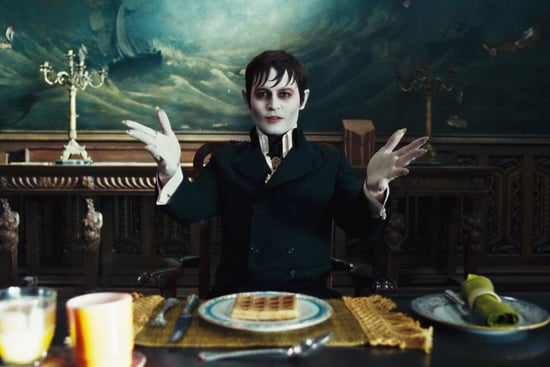 Depp stars as Barnabus Collins, a man who is turned into a vampire in the late 1700s by Angelique (Eva Green), a witch whose heart he has broken. After his loved ones are killed by Angelique, Barnabus is buried for 200 years until he's accidentally dug up. Back in his mansion in the 1970s, he gets acquainted with the existing Collins clan (including Michelle Pfeiffer and Chloë Grace Moretz), and sets about building a relationship with them, reinvigorating the family business, and going head-to-head with Angelique — who's been thriving for centuries. There's certainly a lot going on in, but none of it is compelling enough to make a satisfying movie.

To find out what else I thought of the movie, just keep reading.

Depp's performance is the highlight, using Barnabus's formal speech and spooked expressions to get the most humor out of his encounters with modern technology and culture. However, while Barnabus has an eerie charisma that makes him a likable character, his vampire look is so off-putting that it's hard to wrap your mind around how the female characters, like Angelique and the family psychiatrist (Helena Bonham-Carter), are attracted to him. His pointed ears and sharp nails are attention getting, sure, but sexy? No.

The plot meanders so much that Barnabus is the only character we get to know well. There are many issues that plague the other characters, but they only skim the surface of a family tragedy, a mystery surrounding the governess and a secret that teen Carolyn (Moretz) is keeping. I wanted to know more about these subplots, or at least have the characters fully fleshed out.

The script is pretty amusing at times, but it relies too heavily on Barnabus's confusion about the '70s. When those jokes grow tired, the other elements of the movie don't stand on their own. Dark Shadows needs more than its eternally entertaining star and Burton's touch — it needs a story.