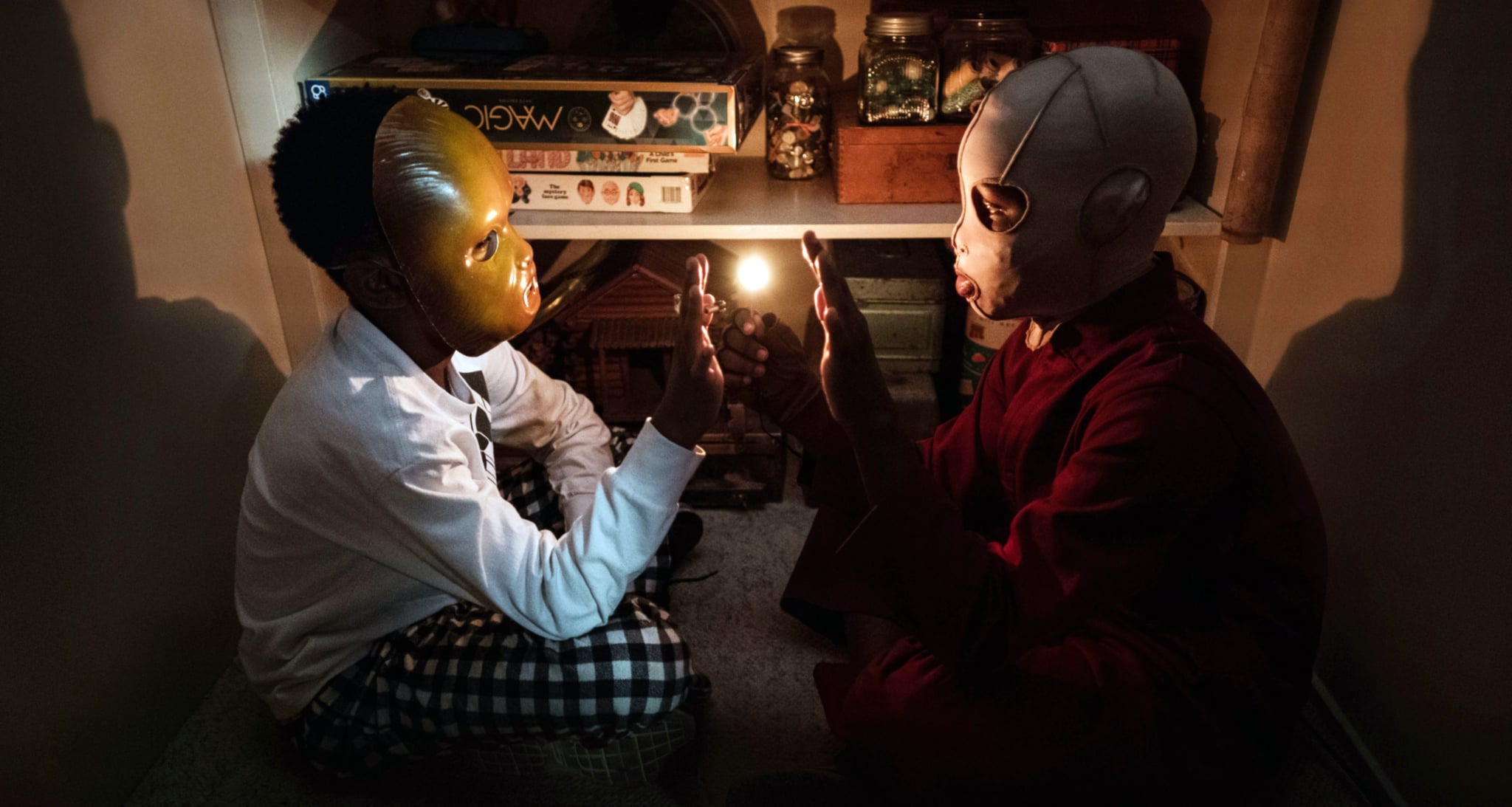 Warning: big, BIG ol' spoilers for Us ahead!

Given how many theories merely the trailer for Us spawned a few months back, it shouldn't come as any surprise that the film itself has since had audiences across the world collectively shaking their heads as they attempt to decode all the hidden meanings and Easter eggs woven into the fabric of Jordan Peele's latest entry into the horror genre. But a recent theory on Reddit is so insane (and also plausible) that it's attracting plenty of buzz: could the little boy we know as Jason actually be Pluto all along?

Reddit user hoopsterben posted a wildly interesting take to the /r/FanTheories section of the site, one that hones in on how Jason and his Tethered, Pluto, might have switched places. They write: "I believe the Summer before the movie takes place, the boy and his 'tethered' also switched places . . . At the end, he has realized that his mother, at one point, has also switched bodies. She gives him a look almost like 'I also know what you know' and then he puts on his mask, as a symbol of the masks they will now wear for the rest of their lives."

Did you hear that sound? It was me, gasping for breath at the possibility that could actually be what Peele intended. And you know what? It actually holds a bit of water when you take a closer look at Jason's arc throughout the film. Let's dive in, shall we?

To understand why the two little boys switching places is so important (and so terrifying), we have to remember the origin of Lupita Nyong'o's character, Adelaide. Long before she's the paranoid suburban mom to young Jason and teenager Zora (Shahadi Wright Joseph), she was just your average preteen getting taken to the Santa Cruz boardwalk for her birthday by her parents. But during that trip, the real Adelaide wanders off by herself into a hall of mirrors and is captured by her own doppelgänger, another little girl named Red, who looks exactly like her from her face to her choice of clothing.

Red proceeds to drag Adelaide down to the tunnels and trap her there with the rest of the Tethered. The doppelgänger essentially then steals the real Adelaide's life, going back to her parents and living above ground. At the end of the film we discover this massive twist when Adelaide and Red fight to the death in the underground tunnels beneath the boardwalk. Their fatal interaction reveals that the seemingly "normal" woman we've been watching all along was actually born a member of the mysterious, "evil" Tethered race.

Related:
An Explanation For Who — and What — the "Tethered" Are in Jordan Peele's Us

So, what does this have to do with Jason? Well, as hoopsterben wrote in their theory, "I believe the Summer before the movie takes place the boy and his 'tethered' also switched places." Earlier on in the film, Zora makes a reference to her little brother going missing after he got stuck in the closet of the family's vacation home the previous year. But what if it wasn't the year before, but a few years before? Pluto, Jason's doppelgänger, could've switched places with him during that absence, and the longer time period could give the Tethered boy long enough to learn how to properly speak.

Meanwhile, this could explain why Pluto scampers around on all fours like a toddler, and also why "Jason" is so withdrawn, preferring to play in the darkness of the closet than with his sister. There are also a few other things to consider.

Remember that device that Jason has on his hand throughout the film, that he keeps snapping in an attempt to make it burst into flame? As he notes over and over again, he "forgot" how the magic trick worked between the family's last trip to the beach and their current trip. But what if he didn't actually forget it — what if he had to relearn it entirely? Hoopsterben posits that the original Jason "learned it successfully and burnt half of his face off in the process," which explains why his Tethered would only have a slight memory of learning how to do it trick.

During Adelaide's flashback, she encounters a man on the boardwalk holding up a cardboard sign with Jeremiah 11:11 written on it. In the present timeline, Jason strays from his family at the same beach and bumps into the same man, only this time he's wearing a Tethered jumpsuit and has blood all over him. At night while tucking in Jason, Adelaide sees he's drawn his interaction with the Tethered man in crayon, depicting the back of his own head looking in the direction of the back of the Jeremiah 11:11 man. Naturally, Adelaide is rattled by the image.

What's interesting about this little detail is that when Adelaide was replaced by her Tethered doppelgänger, her parents took her to therapy to try to figure out why their daughter was all of a sudden refusing to speak and seemed devoid of emotion. The therapist, diagnosing her with PTSD from her boardwalk encounter, suggests they have Adelaide draw to express herself. Coincidence? Or something more?!

Meeting the 11:11 man isn't the only odd thing that people on Reddit have noticed about Jason's day out at the beach. While Zora listens to music and the Tyler twins do cartwheels, Jason sits down to build . . . tunnels. Not sand castles, but tunnels. He could just be showing an early passion for engineering, but it seems more like Jason is channeling his connection to the subterranean dwelling the Tethered call home.

An odd thing about Pluto is that he doesn't seem too keen on wanting to kill Jason (at least right away). Jason's father, Gabe, gets beat up pretty much immediately, Adelaide is chained to a table and threatened with death, and Zora's double literally chases her down with scissors. But Pluto and Jason sit down in the vacation house's closet for a mirroring game, matching each other's exact movements rather than opting for bloodshed. They share a bond the other pairs do not.

As we see in the closet, whatever Jason does, Pluto mimics. When you take into account that the Tethered's origins are as a failed experiment to control the un-Tethered population up in the real world by the government, maybe Jason (the real Tethered) has more control over Pluto (the original Jason) than we might think. It would certainly explain how Jason is able to manipulate his deformed doppelgänger into stepping backwards into a fiery car wreck, ending his life.

After Adelaide defeats Red in the tunnels and escapes outside to drive her family south to Mexico, she looks over at Jason in the passenger seat with a smile that can easily be interpreted as conspiratorial. As he lovingly strokes a rabbit he took from the tunnels (hmm . . .) in his lap, he shoots her a suspicious look and then pulls the werewolf mask back down over his head.

"At the end, he has realized that his mother, at one point, has also switched bodies," hoopsterben writes. "She gives him a look almost like 'I also know what you know' and then he puts on his mask, as a symbol of the masks they will now wear for the rest of their lives."

Related:
Why the "Jeremiah 11:11" Bible Verse Is So Important to Jordan Peele's Us

Still not convinced? Read the Redditor's theory in full ahead:

Us Theory (SPOILERS) from r/FanTheories

Movies
Too Scared to See Brahms: The Boy II? Here's the Big Twist
by Julia Duda 3 days ago

Elisabeth Moss
Hold Up, The Invisible Man Movie Looks WAY Different Than the Book
by Chrissy Bobic 1 day ago

TV
The Mandalorian: We Have Some Theories About What Might Happen in Season 2
by Amanda Prahl 5 days ago 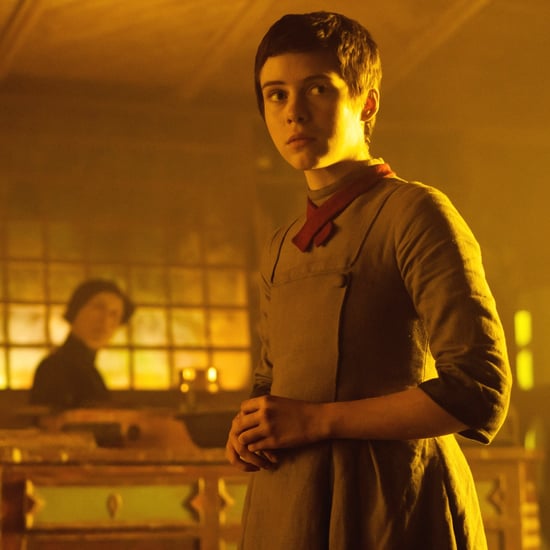 Movies
Too Scared to See Gretel & Hansel? Here Are All the Spooky Spoilers
by Amber Frost 2 weeks ago