Prepare to be refreshed: for every dozen lackluster comedies, a diamond in the rough emerges, and by the looks of this trailer, that diamond could be Easy A. Emma Stone is at home in the starring role of the high school comedy — somewhat of a modern-day version of The Scarlet Letter — as Olive, a high school nobody. Her standing at school suddenly changes when she pretends to sleep with a gay classmate (Cougar Town's Dan Byrd) as an act of goodwill so their peers will stop torturing him. The lie soon snowballs, and her rep becomes both scandalized and impossible to ignore. 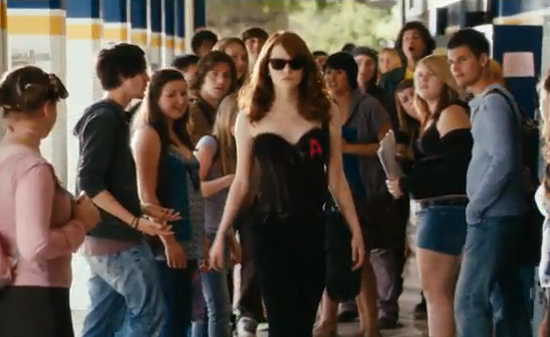 The premise is made all the better by the funny preview — it definitely smacks of Mean Girls, both in setting and humor (sample Olive quip: "I fake rocked your world"). Factor in the many famous faces in the film, like Penn Badgley, Amanda Bynes, Lisa Kudrow, plus Patricia Clarkson and Stanley Tucci as Olive's parents, and I'm ready to slap on a scarlet "E" for excited.

Zendaya
Zendaya Wants to Make a “Love Story About Two Black Girls” Without the Trauma — Yes, Please!
by Naledi Ushe 1 hour ago

Elie Saab
West Side Story's Rachel Zegler Has a Princess Moment in a Blush, Sequined Ball Gown
by Sarah Wasilak 6 hours ago