Don't worry, the Elf on the Shelf keeps his clothes on for his Miley Cyrus moment. As people take to social media for their clever Elf on a Shelf photos, the one that's really making the rounds is the elf's hilarious "Wrecking Ball" pose, which feels only appropriate in the wake of so many other Miley parodies. Meanwhile, a Mean Girls/The Hobbit mashup is seriously fetch, and a new Home Alone trailer gives us the real story. See all that and more with this week's funniest photos and videos.

The Elf on the Shelf Meets Miley Cyrus 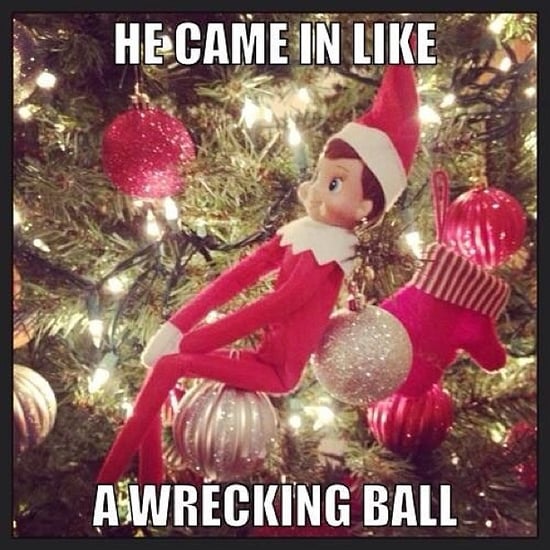 This on-point Elf on the Shelf "Wrecking Ball" meme has been making its way around the Internet, because obviously.

The Hobbit plus Mean Girls gives us "Mean Elves," a magical combination of The Plastics and the Middle Earth clique. Bonus points for a hilarious cameo at the end!

Catching Fire According to the Elderly

Catching Fire is the hot topic for the latest "Elders React" episode. In it, the elderly watch the film's trailer while offering priceless commentary to the tune of: "That one was wearing a Lady Gaga costume."

During an appearance on Jimmy Kimmel Live, Benedict Cumberbatch gave a dramatic reading of lyrics by fellow show guest R. Kelly, offering a priceless wink at the end.

Whoa. Jonathan Burnside really committed to Movember, growing not just a mustache for a cause, but an entire cat portrait.

Miley Cyrus
Miley Cyrus's New Album, Plastic Hearts, Is Dropping in November After 2 Years in the Making
by Brea Cubit 17 hours ago

Miley Cyrus
Miley Cyrus Is Making a Metallica Cover Album, and We're Ready For Her Version of Heavy Metal
by Grayson Gilcrease 3 days ago