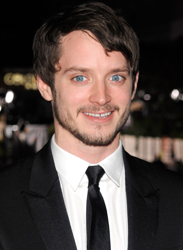 After rumors swirled about Elijah Wood's involvement in Peter Jackson's adaptation of The Hobbit, we now have official word. EW has confirmed that the actor will reprise his role as Frodo Baggins, even though Frodo does not appear in the book. Wood will take part in the beginning of the film to frame the story. However Jackson decides to work him in, we're just glad to see Frodo getting some screen time!