Eliza Coupe is part of one of TV's funniest ensembles on Happy Endings, and when I recently chatted with the actress, I found that she's just as hilarious as her character, Jane. Coupe dished about the hijinks we can expect from the rest of the season, but she also she talked about the Happy Endings footage we may never see: the blooper reel. Coupe told me why it might not be suitable for the public, and she also confessed which of her crushes will make a guest appearance on the show. 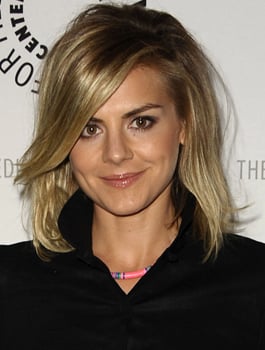 BuzzSugar: Which of your costars make you crack up during scenes?
Eliza Coupe: Almost all of them. Honestly, all of them, they all do. If we have a scene with all of us, it's ridiculous. But of course Damon [Wayans Jr.] and I . . . they showed a gag reel at our wrap party a week and a half ago and it was edited down to two hours and nine minutes, and honestly the whole thing was Damon and I, because we completely break all the time with each other. And we do it purposely. We're horrible. The crew after a while is like, "OK, OK, alright, everybody."

Buzz: How does one get their hands on this gag reel?
EC: I know, it's so good! It's totally R-rated though. Damon and I use every single bad word that's been invented, or we invent it ourselves.

Buzz: I hope it's on the DVD.
EC: I know! I hope so too. I wish they would just release it. I think it would be such a cool thing to have it released, but I feel like there would be some serious bans on it though. It would be taken off the Internet, it's so dirty. It is so dirty.

Buzz: How dirty?
EC: Well in Happy Endings, we shoot pretty much everything X-rated, R-rated, NC-17, whatever you want to call it, and then they trim it down to make it suitable for network television.

To find out just how dirty the Happy Endings scripts are before they air and what Coupe said about the season finale, just keep reading.

Buzz: Is it in the script like that, or is it you guys improvising to make it dirtier?
EC: No, it's been in the script that way. In the episode that's going to [air] next week, my character in the script actually said, 'Who the f*** is that?' And they had to change it, obviously, but at the table read, I was like, I love that — I wish we could actually say this. But they had to change it, and the writers are so great because they know the intention behind it, and as long as it has that intention, then hopefully it will come off with the same effect.

Buzz: What's coming up in the rest of the season for Jane?
EC: The season finale is amazing. Everybody is just firing on all cylinders. There's some dancing involved, and I'm a self-proclaimed phenomenal dancer. I don't know if that's going to make it in — it might be in the next gag reel, but I do some dancing, Damon does some dancing, [Adam] Pally does some dancing, and Casey [Wilson] does some dancing. That's really funny, and of course, Jane has a mission, and she decides to take matters into her own hands, and chaos ensues. But it all works out in the end of course, because it's an ABC television show.

Buzz: And Brian Austin Green shows up in the finale, right?
EC: Yes, he was there! I don't know if it'll make it into the cut, but there was one take that we did during the big last scene, the big finale scene, where Casey and I both end up riding him, and I fall off. But I don't want to get into details. I'll just leave you with that.

Buzz: Were you a 90210 fan?
EC: Oh my god, yes. My older brother Sam and I used to have 90210 parties, and I'm from Plymouth, New Hampshire, and you could not get further away from Beverly Hills, 90210, so it was the only thing I knew of what California was. It's all I knew. So we would watch that religiously, and I would get so mad at anyone if they talked while I was watching 90210. I would get really mad. I would have a real situation on my hands.

Buzz: Did you tell any of this to Brian?
EC: No, I didn't, but when I was younger, every week I had a different crush on one of the guys from 90210. My crushes got a little obsessive, so I had to be careful. It was good that it's been a long time.

Buzz: Who was your most obsessive crush on?
EC: I mean, I liked my Dylan McKay. I liked it. But I liked my David Silver. I didn't hate him. I wouldn't kick him out of bed.